Mariette in Ecstasy and the Longing for Language

And Christ still sends me roses. We try to be formed and held and kept by him, but instead he offers us freedom. And now when I try to know his will, his kindness floods me, his great love overwhelms me, and I hear him whisper, Surprise me. ~ Mariette Baptiste, Mariette in Ecstasy 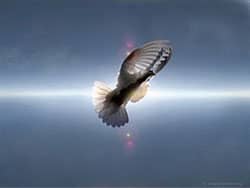 It has been a long time since I first read it, but with a recent re-read I found within this wonderful and strange novel by Ron Hansen (who is a permanent Deacon in the Catholic Church), things I have longed to share since a retreat experience, but have been unable because, well, words failed me. Not just words failed; comprehension failed.

Or, not comprehension, not really. I know what I comprehended, but it was something of such a different order. My attempts to form an analogy of it simply fail. Imagine finding something -- like a stone -- that is covered with strange writing that you are instantly, in a flash, able to comprehend. But you cannot translate it for anyone else because -- although you know the message -- there are no languages on earth with which it may be conveyed.

You fall back on one word, "Love," but that word is wholly insufficient -- using it is like trying to describe a deluge when the only word at your disposal is "damp."

Everything since my retreat has been different. But I, sadly, am still pretty much the same faulty, sinful, cranky, short-tempered, scoffing, and cynical creature I have always been. Except I regret more; I have regret. Or, more correctly, I regret my faults more speedily; I see them more quickly and the sting of regret goes deeper. I seek silence more than I already did. Prayer is both work and rest, but mostly rest. I do more around the house, because the silent contemplation that comes with housework -- where busy hands free the mind -- is more stimulating and instructive than the blaring headlines.

And increasingly, even when my kneejerk instinct to a headline or a piece of news is to snarl, or rage, or smirk, I remember what I wrote in my notebook while before the Blessed Sacrament:

"Everything" is about nothing.
Everything ended with the sacrifice of the Lamb.
All is consummated.
We are forever and always at the Last Supper, at the Crucifixion, at the Resurrection.
Time ended with the tearing of the veil and the rolling back of the stone.
The rest is illusion and catching up.
There is nothing to be afraid of.

And when I remember that, I dash all of my fury, all of my love, all of my passion against the cross of Christ, and settle beneath their shards and fragments as they rain down upon me, and pass and bite and dissolve. And I pray, most particularly for the event or the person or the feeling that has roused my headstrong, foolish passion and lured me toward the illusion, and away from detachment, wherein is found humility and tranquility, wisdom and peace.

And because I am no saint, because I am so flawed, all of that only brings me up to the ground level. My evolution is still in such a primitive stage that I am merely eyes in mud, staring into heaven, unable to do much to lift myself; altogether one with the muck.

So, you see, I'm a middling writer, but not sufficient to the task of relating my retreat.

Re-reading Mariette in Ecstasy, though, I found passages within Hansen's gorgeous prose that gave a glimpse into what I would write, if I could.

. . . I have realized how much simpler it is to pray and keep united with God when I see Him as the source and sum of everything I do. When I walk, I owe it to God that I still can. When I sleep, it is with His permission. My breathing, my happiness, even my being a woman -- all are His gifts to me. So it is my prime intention that whenever I do these practical things, they will be contemplative acts of praise and thanksgiving repeated over and over again. Even when it seems impossible to believe that some pain or misery is from God, I try to believe it and thank Him for it. You should try such a prayer . . .

And, to indulge the mystic a bit:

Oh, what a blissful abandonment it is! Everything in my being tells me to stay there. Every thought I have is of his infinite perfection. Every feeling I have is of his kindness and heavenly love. Every dream I have had is realized in him.

Hours may pass, but I have no sense of tiredness or pain or needs of any kind. Exquisite contentment enthralls me. I have no use for speech except to praise him. I have no desires except to be held there by him forever. I have a vision of him but I cannot see his face or his form, only infinite light and goodness. I hear his voice in an interior way; the words have sweetness and charm but no sound, and yet they are more felt and permanent in my soul than if I heard Jesus pronounce them.

It's all beautifully described and inviting, and accurate in as much as a pinprick may adequately represent the thrust of a flaming sword.

But it's a start.