The parsha (weekly Torah portion) for this week is Toldot. Toldot means ‘generations’ or ‘descendants,’ and is the first distinctive word in the portion. Be sure to check out the video at the end of this article! It’s narrated by Jewish rapper Y-Love!

The parsha begins with a mystery. Why call this parsha toldot? Just a few weeks ago we had parshat Noach about the generations of Noah. There is no obvious reason why that should not have been parsha toldot since it came first or why this parsha should not be named Yitzhak (Isaac) since we are discussing his offspring. Our sages give us a reason. Noah and his generation were not particularly righteous. They didn’t work for goodness; they just didn’t participate in the bad activities. Noah was passive. However, it is from Yitzhak that we the nation of Israel, the Jews, will come from. In this way, our sages are nudging us to be like the son of Isaac and not Noah.

This parsha begins with another case of challenged fertility. Here we learn that Rivka (Rebecca) is having difficulty conceiving. We know that she was young when she married him (though the dispute is whether she was 3 or 13) however, we do know that her barrenness was not counted until they had been married for ten years. It was only then that they recount her ten years of barrenness. This tells us that she was a young girl when they were first married. Regardless, she could not conceive. Both Rivka and Yitzhak prayed that she would conceive. However, it says G-d accepted his prayer. Why his over hers? Our faithful Rashi explains, Rivka prayed in the name of her husband since he was righteous and the son of a righteous man while she was the daughter of a wicked man. However, her husband prayed in her honor since she was such a righteous woman, especially having come from a wicked man.

So our foremother, Rivka, conceives, but all is not well with this pregnancy. She doesn’t understand, when she goes near the yeshiva the baby punched and kicked trying to get out but he also did when she went near the idol worship temple. She was afraid that she had a child who was schizophrenic or had a problem. Rivka prayed to understand what was happening within her and G-d came to her to tell her that she was actually pregnant with twins. Two great nations, two kingdoms, but one will always dominate the other and the elder will serve the younger. She was greatly relieved to hear this. She gave birth first to a very hairy and red baby. They named him Esav because of his hair. Now, literally on his brother’s heel, Yaakov (Jacob) was born. Isaac was partial to the elder, Esav, because he was a good hunter and outdoorsman. Yaakov was more of a homebody. He stayed and tended the tents and was his mother’s favorite.

One day, while they were mourning the death of Abraham, Yaakov cooked some lentils for his father when Esav came up and asked for a dish. Yaakov made a deal. A meal for a birthright. Esav lightly brushed off the birthright for the food and acted as it he despised it. Why would Esav do this? The birthright had a lot to do with serving in the eventual Temple. He knew that it was a long way off before this would be come realized so he didn’t really care. Esav lived in the immediate without a thought to the future. He gave up his birthright easy and disdained it.

Again, we see a famine in this land. Yitzhak can’t go far because he is still bound to the land, so they travel down to visit Avimelech, the king of the Philistines. Here again, we see a patriarch afraid to call his wife, his wife. He calls her his sister and nearly wrecks their lives again. They were not very careful and the king saw them engaging in ‘relations’ (which is delightfully interpreted here as ‘jesting’). Avimelech got very mad mainly because they tried to deceive him and could have caused a big issue. In the end, they settle the situation and Yitzhak settles down to plant the land and it rewards him one hundredfold.

Since Yitzhak was so prosperous, Avimelech was a bit jealous. He sends him away. The parsha here is pretty devoted to talking about our forefather’s penchant for digging successful wells. In one particular instance, he travels to Beer Sheva and G-d appears to him. Here he builds a well and an altar to G-d. It was now that Avimelech realizes the positive aspects of being aligned with such a person and they strike a deal.

At this point, Esav was 40 years old and had married two women who were idol worshipers and Hittites. This did not thrill his parents. However, Yitzhak is nearing 123 years old, which is close to when his father died so he decides to tie up his affairs and give out the blessings to his sons. He called Esav to him and told him to make him a nice meal and he would bless him. Rivka overheard and told Yaakov to make a nice dinner for his father and cover his arms with sheepskin. Then she took Esav’s expensive garments and put them on Yaakov. That brings up another issue, why were Esav’s expensive garments at his mother’s house and not with his wives . . . brings up some interesting questions. 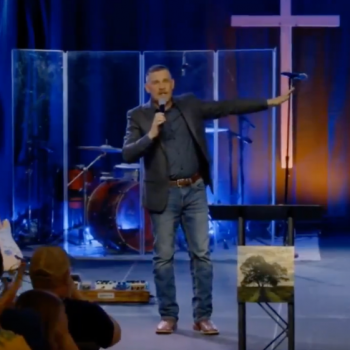 Christian Hate-Preacher: Pride Month Has "Always Been About These Pedophiles"
Hemant Mehta
4

Enough for Everyone (Part 1 of 3)
Herb Montgomery
Get Patheos Newsletters
Get the latest from Patheos by signing up for our newsletters. Try our 3 most popular, or select from our huge collection of unique and thought-provoking newsletters.
From time to time you will also receive Special Offers from our partners that help us make this content free for you. You can opt out of these offers at any time.
see our full list of newsletters
Editor's picks See all columnists