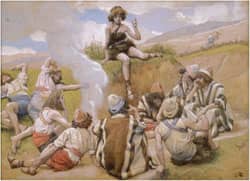 The parsha (weekly Torah portion) for this week is Vayeshev. Vayeshev means ‘and he lived,' and is the first distinctive word in the portion. Be sure to check out the video at the end of this article!

Here we have our good friend Yaakov, Jacob, with his grown family. His favorite son, Yosef (Joseph), is 17 years old. He was a good old-fashioned tattletale who ran to his father with bad stories about his brothers all the time. Here we have some solid sibling rivalry brewing, especially when dad made a very special coat for his very favorite son. The brothers saw this clear bias toward Joseph and hated Joseph for it. But Joseph didn't help matters. He would tell his brothers of his dreams, dreams in which their subservience to him figured prominently. In the first dream, there were twelve sheaves of wheat. His sheaf stood upright and the other eleven bowed down to his. This fueled the brother's anger, "Will you reign over us or will you govern us?" they asked him.

Joseph then shared another dream with them. In this one the sun, moon, and eleven stars were bowing down to his star. But whom could this sun and moon represent? Jacob heard this dream and asked, "What? Will we come I, your mother, and your brothers to bow down to you?" His father scolded him. He was only bringing his brother's hatred upon himself. The brothers hated him but his father held off on judgment because he knew there was some truth to this story.

The brothers go off to graze their sheep in the land of Shechem, and Jacob sends Joseph off to check on them. In his wandering to find his brothers, a man approaches him and directs him to Dotan, where his brothers and the sheep were grazing. This was no ordinary man; our sages tell us it was an angel out to help Joseph. The sages say that this angel was hinting to Jacob that his brothers were going to kill him. Joseph knew his life was in danger at this point, but Rashi intimates that he really didn't understand the depth of this. Additionally, sometimes, when a mitzvah is being so disrespected, it is recommended to even give up your life for this mitzvah. Joseph had to risk his life to honor his father because the brothers were so disrespectful.

Well, as he approaches his brothers, they decide it will be a dandy idea to kill him. The brothers plot this murder but Reuven suggests that they just toss him in a pit. Reuven's intention was to come back and get Joseph once the brothers cooled off a bit, and maybe Joe would be a bit humbled by the experience too. So the brothers grab Joe and take his shirt and coat off of him; then they throw him in a pit that the Torah specifically says has no water in it. What does that mean? Rashi tells us that it means that it had, instead, snakes and scorpions. The brothers sit down for a nice meal while Joseph sits in the nasty pit. Reuven heads off for a little bit and the other brothers see several caravans passing. Judah voices a great idea. Instead of killing the kid, why don't we make a profit and sell him?

The brothers negotiate with the Ishmaelites and sell Joseph for twenty silver pieces. What is unusual here is that the Torah tells us the Ishmaelites were carrying spices in their caravan. Why is this odd? Because they usually transported gasoline and tar but G-d didn't want him to have to suffer the whole trip so this group was carrying something different than usual. It wasn't until Reuven comes back that the brothers realize they might have made a mistake. Not seeing him in the pit, Reuven thinks that the brothers actually killed him. He tears his clothes in a sign of mourning and then they have to think fast. How will they break the news to their dad? So they kill a kid (a baby goat) and put the blood on Joseph's prized coat. When they went home, they gave the coat to their father and without saying he was dead, they tell him that they found Joseph's coat like this.

Jacob assumed, by the state of the coat, that a beast had eaten his son. He mourned deeply for his favorite son. All the children tried to console him but he could not be comforted. Why could he not be comforted? It is easy to say that it was because Joseph was his favorite but Rashi tells us there is a special blessing G-d gives when someone dies, so that his relatives may find comfort. The pain grows less and less as time passes. Since Joseph was still alive, Jacob never got that bracha (blessing) and couldn't be consoled. Meanwhile, Joseph had been sold to the Midianites who then sold him to a successful merchant in Egypt named Potiphar.