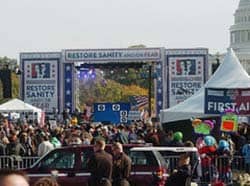 Last Saturday's "Rally for Sanity and/or Fear" took a different tack from Glenn Beck's mass revival meeting, yet while the spirituality was much more subtle than Beck's altar call to America, its aim could still have been described as spiritual in nature. Jon Stewart and Stephen Colbert called for a return to reason in politics and civil discourse, to an end to demonizing the opposition, and to seeking peace in our hearts and discourse. Stewart asserted in prophetic tones that "if we amplify everything, we hear nothing." Although Stewart, unlike Beck, did not claim the mantle of a religious leader, his words touched deep spiritual issues -- first, the noxious antagonism and dishonesty that threaten our democratic way of life; second, the idolatrous elevation of personal and political (and dare we say, religious) ideology and consequent the inability to find common ground; and third, the culture of fear and anxiety perpetuated by the media.

Stewart invited the nation to take seriously the "golden rule" in personal and political conversation. The commandment against bearing false witness is the one commandment consciously and purposely violated in political campaigns. We need a restoration of honesty and community as the prelude and necessary requirement for any "restoration of honor" (Beck). The balkanization of politics is the greatest danger to the future of any nation. The notion that Democrats can't find common ground with Republicans, or liberals with conservatives, threatens to destroy the body politic. This is especially tragic when Christians, holding on to the certainty of their positions, refuse to compromise and, then, demonize other opinions. Such Christians make idols of their own positions -- forgetting the Apostle Paul's caution that we see in a mirror dimly and that our treasures, our positions, are in earthen vessels; and, perhaps, more dangerous theologically, forgetting that sin and self-interest may infect their own viewpoints.

Failure to compromise may very well be a manifestation of violence in the political and communal realm. Ideology places our vision ahead of God's vision, and reduces diversity to opposition rather than seeing the holy in those with whom we disagree. Ideology makes it impossible to see our opponent as a person and not a caricature to be belittled or marginalized. Ideologues, so certain about the truth of their viewpoint, neglect to see what the Benedictine tradition describes as Christ in the other. Over fifty years ago, Reinhold Niebuhr counseled people of conviction to look for the truth in their opponent's falsehood and the falsehood in their own truth. More than ever, this is sage advice, especially to religious persons who, in the political realm, claim to know more than God!

The rally also addressed the reality of fear in politics and the media. Think a moment about the local reports -- on the most tranquil day of year, the local station highlights "the storm report." No people have been more protected from the environment; still, a few inches of rain or snow, or a thunderstorm are highlighted as a risk to life and limb. Cable television's 24/7 news cycle is not intended so much to inform us, but to lure us to stay tuned for the next report of threat or scurrilous behavior by political opponents. Anxiety and animosity is the name of the game among the Becks and O'Reillys and, to a lesser degree, the Olbermanns and Maddows -- still on all sides, there is little peace and comfort to be found.

Our current situation is dominated by fear and scarcity. We are, as Jesus said to Martha of Bethany, anxious about many things. Ruled by anxiety and antagonism, there is little chance for reason to prevail. In a complex world, we need to emphasize imagination, relationship, the quest for common ground, and big picture thinking rather than reactive behavior. Faith traditions have always invited persons to grow in wisdom and stature -- to see holiness in all things, to embrace diversity, and to be innovative in times of stress. Perhaps, now more than ever, we need to "consider the lilies" and God's care for the grasses of the fields and the birds of the air as an antidote to fearfulness and scarcity thinking.

While not providing clear solutions to our national malaise, Stewart and Colbert invite us to explore spiritual approaches to communication and decision-making. They point us toward a world in which abundance and calm replace scarcity and fear. They inspire us to see diversity as a pathway to wisdom and recognition of otherness as the key to healthy decision-making.

We need to restore "sanity" to our body politic; this is a national necessity as well as a religious imperative for our time.