Tina was a low-income Latina single mother who struggled all year to provide food and shelter for her seven children. Determined to give them Christmas presents, too, she would buy gifts on clearance sales all year and hide them in her closet. Tina was part of my church small group, and at an early December gathering, one member asked about Santa Claus -- should parents let their children believe in Santa? I didn't have children then, so the issue was merely theoretical for me, but it was very real for Tina. She burst out, "No way I'm telling my kids about Santa! I worked hard for these presents, and they're going to thank me for them. No white man is getting credit for my hard work!" She laughed along with everyone else, but years later, I find her words to be as wise as they were funny. 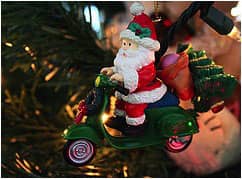 I'm married now, with three preschool children who move effortlessly between real and imaginary worlds. Scratchy monsters sit beside them at the dinner table and three-headed bird-mermaids share their baths. I welcome these characters into our daily lives, but what about Santa? It doesn't seem wise to encourage children to project their material aspirations onto an idealized white man. Children shouldn't believe that consumer goods are produced by happy elves in a wintery workshop, when the reality is that many of those goods are produced by other children working in abysmal conditions. A person shouldn't have to pander to a white man -- sit on his lap and beg, even! -- to enjoy the good life. As a full-time working mother (I'm an anthropology professor), it's an insult to disguise my income generation, shopping, and gift-wrapping as the magical work of a benevolent white man.

As a counter-example, consider the Easter Bunny. A bunny that acts like a person is implausible, but fun to imagine. It's funny to picture a small, vulnerable animal suddenly gaining powers that influence the human world. There's an upside-downness to the Easter bunny that reflects the power dynamics of the kingdom of God. The weak become strong, the meek have their day, the animal blesses the human. There's good theological freight trailing behind the Easter bunny. If Santa were a refugee, or a woman of color, or even a plant or animal, I could probably get on board.

As it stands, however, Santa is in direct competition with God, and it seems Santa may have the upper hand. They're both often portrayed as bearded white men, but Santa gives more hugs and shows up in the flesh at the mall. They both despise naughtiness, but whereas Santa might give you a lump of coal, God might damn you eternally. They both listen to petitions, but Santa grants wishes much more reliably. Your odds are much better if you pray to Santa for a Wii than if you ask God for your fighting parents to not divorce. They're both invisible characters that appear from time to time, so how does a Christian parent convince a child that God is really real (especially if you once told the child that Santa was also real)?

I'm not saying there is only one right answer; after all, I was raised to believe in both Santa and God, and as I grew up, I released Santa to the world of imagination and held onto belief in God. I've found my answer, and it's the same as Tina's. I'm telling my kids that Santa is like the scratchy monster and the three-headed bird-mermaid: a silly, fun character that we welcome into our home. We'll make ornaments that bear his image and we'll draw him in the snow on the minivan's windshield, but we won't say Santa brought our presents. Gifts are costly; there are people and environmental assets contributing to every step of their production, distribution, and purchase. It would be easier to believe that our gifts and their plastic packaging came from Santa's workshop instead of a Chinese sweatshop, but this comfort comes at a high price when it makes us content to pursue consumerism with no regard for its human or environmental costs.

Sometimes I wonder whether I'm being too much of an anthropologist and not enough of a mother. After all, I shouldn't deny my children their own culture just because I've deconstructed it myself. But I learned this lesson more from Tina, another mother, than from graduate education. We should treasure the gifts we receive, knowing they were purchased at a price. Children should not be shielded from the realities of how globalization links us, via remote control cars and princess dolls, to slaves, sweatshop workers, and destitute children. Kids should learn, from very young ages, to perceive race, gender, and social class inequalities in their world, and the ways in which cultural myths such as Santa Claus prevent us from seeing things as they are. And, especially important to me, kids should not expect God to behave like Santa Claus, granting wishes in exchange for good behavior. Not believing in Santa may actually help save Christmas, protecting the possibility that children, and their parents, may see that God is real.