2010 Religion Stories of the Year 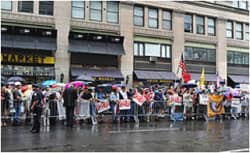 Public debate and controversy over a planned Islamic community center and mosque to be built near New York's Ground Zero ignited a national debate about religious freedom that kept the story in the news for months.

Public opinion and outcry over the mosque reached a peak when a pastor of a small Florida church threatened to burn a Qu'ran in protest, a bravado that fueled fears of international backlash against the United States until the pastor backed down.

As newsmaker of the year, Rauf beat out Pope Benedict XVI, the many faith-based workers helping victims of the Haitian government, and Sarah Palin, who devoted significant portions of her second bestselling book arguing that candidates for office take a public Christian stand.

The complete Top 10 Religion Stories of 2010, in order from first to tenth are:

1. A proposal to build an Islamic center and mosque near Ground Zero leads to a national debate on religious freedom, with strong statements on both sides as the 9/11 anniversary approached. A Gainesville, Fla., pastor, who vowed to burn copies of the Qu'ran in protest, backs down.

2. The catastrophic earthquake in Haiti sparks relief efforts by many and varied faith-based groups. One by Idaho Southern Baptists leads to child-smuggling accusations, as well as to examinations of others' practices. Leader Laura Silsby is imprisoned for four months.

3. Pope Benedict XVI is accused of delaying church action against pedophile priests in Ireland, Germany, the United States, and other countries when he led the Vatican office in charge of discipline 1981 to 2005. Several bishops resign. Benedict continues to criticize the church's handling of past cases.

4. The rise of the Tea Party movement is seen by some as a return to political prominence for the religious right; others see it as stressing economic rather than social issues. Mormon Glenn Beck pushes a Washington rally. Election results are mixed. One Tea Party candidate who loses, however, is Delaware Senate candidate Christine O'Donnell, who was pilloried for responding to critics with an ad that stated, "I am not a witch."

5. President Obama signs the health-care reform bill for which many faith-based groups labored. Near year's end the Catholic bishops repeat their strong opposition to it due to the belief that it provides funding for abortions, and lament support some Catholics gave it.

6. Sexuality continues as a hot topic among mainline congregations. The General Assembly of the Presbyterian Church USA votes for the fourth time to lift the ban on noncelibate gay clergy; the presbyteries are again voting on it. The Evangelical Lutheran Church in America suffers scores of defections after its 2009 vote on the issue. The Episcopal Church is asked by the archbishop of Canterbury to take a lesser role in the Anglican Communion after a lesbian assistant bishop is ordained.

8. Bullying draws attention with several suicides attributed to it, including a New Jersey college student. Religious groups strongly condemn it, but some see it as having religious roots, especially in regards to homosexuality. Several religious voices take part in the "It gets better" YouTube video project to encourage gay youth not to commit suicide or succumb to depression.

9. The U.S. Religious Knowledge Survey released by the Pew Forum offers some surprising findings, including that atheists, agnostics, Jews, and Mormons had the highest correct answers.

10. The U.S. Supreme Court convenes for the first time ever without a Protestant in its number (six Catholics and three Jews). The court hears arguments in the case of the Kansas church that loudly protests at funerals of servicemen; the decision will come this spring. The Court earlier allows a cross to remain at least temporarily on National Park land in the Mojave Desert, but then the cross is stolen.

11. Faith-based aid workers are slain in Pakistan and Afghanistan.