As Sisters in Zion: Mormon Feminism and Sisterhood

Twenty years ago at BYU I took a class I'll never forget: English 352, Contemporary Literary Criticism. Each week a different group of students gave a presentation based on a major text in the field. When it was my group's turn we faced our audience from the front of the room, the four of us representing the four different strands of feminism described in Alison Jaggar's tome, Feminist Politics and Human Nature.

By way of introduction, we took turns summarizing our assigned persona's point of view. Buffy, the liberal feminist dressed in full 1970s regalia, pulled a bra from her pantsuit pocket and set it aflame with a cigarette lighter (which, thankfully, didn't trigger the sprinkler system). Tiffany and Cami, the Marxist and socialist feminists, decried the misogyny of capitalism and the alienation of the female proletariat. And as the radical feminist, I twanged a dissonant chord on my acoustic guitar and called for an end to patriarchal hegemony, announcing (among other things I'd best not repeat) that "the future is female."

Thus ended the tidy turn-taking. Students fired off questions about feminist philosophy and practice and we endeavored to answer, sometimes talking all at once, often contradicting one another. Not fighting, but definitely arguing, like a bunch of sisters who are best friends and worst enemies. A few students complained about the incoherence. How could they know what feminism was if the feminists themselves didn't agree? We replied that they were missing the point: by definition, feminism resists definition. Our professor (a feminist herself) applauded in agreement. Feminism, she said, does not and cannot fit into tidy boxes. At its very essence, feminism is a conversation.

This conversation, which has waxed and waned for over a hundred years, recently intensified in the wake of Sarah Palin's claim to be a feminist. Likewise, prickly questions of feminist identity have arisen again in LDS circles as a new wave of Mormon feminism gains momentum and visibility.[1] Five-plus years of dialogue in the bloggernacle on sites like Feminist Mormon Housewives preceded the current burst of activity, which features the birth of the feminist organization LDS WAVE and the rebirth of the feminist publication Exponent II.[2] NPR's Radio West recently aired an interview on this topic with Mormon historian Claudia Bushman and scholar Joanna Brooks (who, uncannily enough, was a classmate of mine in English 352). "Mormon feminism," Joanna declared in a related post, "is back."

So is the attending debate. In the secular realm even conservatives like Sarah Palin are eager to call themselves feminists, but since LDS tradition holds feminism -- "the f-word," Claudia Bushman quips -- in deep distrust, even Mormons who support basic feminist ideals may hesitate to claim the label. Rather than asking "Who gets to be a feminist?" we're asking, with suspicion, "Who among us is a feminist? Can you really be a faithful Mormon and a feminist? What do Mormon feminists want?" The cultural friction of the dialogue smolders like Buffy's burning bra. And the strongest conflicts arise amongst Mormon women themselves -- notably, women who call each other "sister." 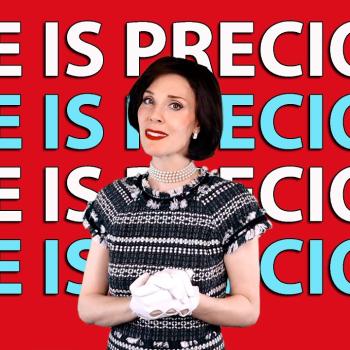 Mrs. Betty Bowers: For Christians, Life is Precious... Except When It's Not
Hemant Mehta
4

Magnificat (On My Own)
James McGrath
About
Get Patheos Newsletters
Get the latest from Patheos by signing up for our newsletters. Try our 3 most popular, or select from our huge collection of unique and thought-provoking newsletters.
From time to time you will also receive Special Offers from our partners that help us make this content free for you. You can opt out of these offers at any time.
see our full list of newsletters