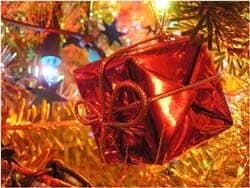 Christmas, originating from the expression "Christ's mass," is a major holiday in many of the world's Western countries. It occurs on December 25, and commemorates the birth of Jesus Christ. Christians believe that Jesus is the Son of God, born to a virgin mother, and that he was sent to the earth to save humankind from their sins.

Although Jesus' birth is remembered and celebrated at Christmas, there is no evidence that he was actually born during this period of the year. Instead, this date seems to have been selected to occur near the time of the winter solstice or of an ancient Roman festival. The winter solstice takes place on December 21 or 22, when sunlight is shortest in the northern hemisphere. In traditional societies, the solstice represented the earth's rebirth, as from this point forward the days would be longer and brighter.

The ancient Roman holiday called "Saturnalia" also occurred at this time, beginning around December 17 and continuing for one week. This popular festival was originally linked to the dedication of the temple of the god Saturn, but quickly became an occasion for giving and receiving gifts, participating in banquets and markets, and for allowing slaves special privileges.

Because it was so long ago that Christians began to celebrate Christ's birth in December (perhaps as early as the first century C.E.), it is unclear how or when exactly they borrowed some of the customs of Saturnalia. What is certain is that today, Christmas too is associated with giving gifts to family members and friends, and with special meals and markets.

Although Christmas has Christian origins, this gift-giving and celebration is now generally observed both by the non-religious and by non-Christians. Families in the United States typically set up a Christmas tree, which is often a fir tree decorated with electric lights and ornaments. They wrap gifts in decorative paper and set them under the tree, to be opened on Christmas.

Family members also often hang up stockings near the fireplace; these are filled with small presents and candies.  American children are usually told that "Santa Claus" will bring them these gifts if they are well behaved. He supposedly visits their homes during Christmas Eve, when they are sleeping. This legendary white-bearded figure, rotund and affable, is associated with Saint Nicholas. He is a Christian saint and brings sweets and small toys to children in Europe on his feast day, December 6.

Besides Santa Claus, Christmas in the United States is marked by many other figures of secular and popular culture. These include the reindeer who pull Santa's sleigh and "Frosty the Snowman."

In addition to this, observant Christians often display a "nativity scene" (small wooden or plastic figures representing those present at Jesus' birth) in their home and attend a special Christmas program at their church.  (Members of the Orthodox Church celebrate Christmas on January 7.)

Christmas food traditions vary a great deal, influenced by geography, culture, and climate. Most European Christians enjoy their Christmas dinner on Christmas Eve, while Americans tend to hold a festive meal on Christmas Day. A large variety of food and drink is consumed around the world. In Australia, for example, Christmas occurs in midsummer and barbecued meats are often served, with ice cream or sorbet for dessert. The preferred meal in Germany is roasted goose with vegetables. Traditional Christmas pudding and mince pies are eaten in many homes in Britain. In the United States, typical Christmas foods include turkey, ham, goose, fruitcake, cookies, and pumpkin pie.