This sermon was preached on Christmas Day 1904, in the Church of St. Peter at Stonyhurst College, England, by Father Herbert Lucas, S.J. (1852-1933), a faculty member and author. Founded in 16th-century France by English Jesuits, it educated English Catholics at a time when their government banned Catholic schools. The school relocated in 1794 to England, where it has remained ever since. Its alumni include saints, royalty, generals, presidents, bishops, and a signer of the Declaration of Independence. In 1909, Father Lucas' sermons to the student body were collected together in the book At the Parting of the Ways: And Other Discourses.

And the shepherds said one to another: "Let us go over to Bethlehem, and see this thing that is come to pass" (Luke 2:15). 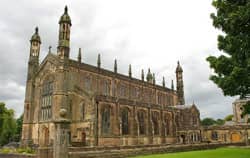 Let us go over to Bethlehem, in company with the shepherds, and see this thing that has come to pass. It is but a mile or two from Migdol-Eder, the traditional site of the shepherds' watch-tower, to the cave in the scarp of the rock whereon the little city of Bethlehem is built; and there will be no difficulty in obtaining admittance, for it stands open to all the world. And what shall we find at the end of our short journey? A poor mother, forced by the crowded condition of the town to take refuge with her husband in the cave, and her new-born Child. It is indeed a pathetic scene, one to move our pity and commiseration; but is it a theme for angels' songs, an event to be hymned "by a great multitude of the heavenly host"? To the eye of faith it is indeed a theme and an event worthy of being hymned, not for a few moments only in the hearing of a few poor shepherds, but with the whole court of heaven for audience through all eternity.

For this weakling babe is none other than the great Omnipotent Himself; this seeming-pauper Child is He the very dust from whose treasure-house spangles the firmament with stars; this infant of but a few hours old is the Eternal Word, with God from the beginning and from the beginning God. For this is He of whom the prophet spoke: "Behold a Virgin shall conceive, and shall bear a child; and His name shall be called Emmanuel, Imma-nu-El, Nobiscum Deus, ‘God with us,' ‘God in our midst.'"

And why is He with us? Why is He in our midst? And if, in His great love for mankind, He must needs become one of us, why does He come in such a guise? Why is the Omnipotent swathed in bands? Why is the Eternal Wisdom speechless? Why does He come in the character of a very outcast from the society of men, fain to borrow from the brute beasts themselves their stall for His palace and their manger for His royal bed of state? Ah! brethren, we know well why He came. The reason is told in that other name of His which was given Him at the bidding of the Angel. "Thou shalt call His name Jesus." The name Jesus means "Saviour," or more correctly, "God our Saviour."

He is Emmanuel, "God with us," that He may be to us Jesus, "God our Saviour." And what are the things from which He has come to save us? Not poverty, or toil, or even suffering and sorrow. No; He has come to bless poverty, to sanctify toil, to make obscurity honourable, to sweeten suffering, to confer happiness in the midst of sorrow. He has come, not to take away these things, but to hallow them. But there is one evil which He has come to take away, one burden which He has come to lift from our shoulders, and that is, as you know very well, the evil and the burden of sin. "Thou shalt call His name Jesus, because He shall save His people from their sins." Yes, to save us from sin, and from the awful consequences of sin, therefore it was that He came. To save us from sin, yet not without our own co-operation, and therefore it was that He came in such a guise.

He would save us, not at His ease, as one who, standing in security on the bank, might fling a rope to a drowning man. Rather He would Himself plunge into the full tide of all our troubles, and make Himself the companion of all our struggles to reach the eternal shore. He would save us, not as some physician might prolong for a few years the life of a sick man, by prescribing suitable remedies and a wholesome diet; but He would give Himself for our food, and the drugs for our healing should be compounded in the pharmacy of His Sacred Heart, and should issue forth from His wounds. He would save us, not as some one, himself immune from the pursuit of justice, might point out to some fugitive from the arm of the law a way of escape; but He would take upon Himself the penalty of all our misdeeds, paying to the full the price of our ransom. It was thus that He would justify His name, His all-holy name, of Jesus, "God our Saviour."