Endings and the Christmas Story

Christmas has brought another round of reflections on the message of the season, and I've been struck by how many people are now describing it in terms of power:

"It is the season in which we celebrate the defeat of imperial power."

"It is the season we celebrate the power of the powerless."

Language of this kind is everywhere and it is striking because the original Christmas celebration made little or nothing of power. The most telling words describing the incarnation are those of the Magnificat (Luke 1:46-55). While it describes the scattering of the proud, the casting down of the mighty, and the lifting up of the lowly, each is a manifestation of the strength of God's arm, God's faithfulness, and God's mercy.

That's in part because the early recipients of that message could count on continuing to live on the margins of ancient society. But it is also because their central concern revolved not around socio-economic realities, but around the vindication of God's promises.

If the promises of God weren't true, then God wasn't God, and God's people were up the proverbial creek without a paddle. The "righteousness of God" as it is described in both the Hebrew and Greek Testaments is not about moral rectitude, it is about the order that God intends. And from start to finish, from Genesis to Revelation, the narrative is about promises made and kept about the divine order of things.

To the extent that the original Christmas story was a story about power, then, it was a story about God's power. Part of the reason that the early church endured life on the margins of ancient society can be traced to that conviction. And, as Augustine noted, you can't understand the story unless you know how it ends.

So, how did the end of the story become all about the establishment of a new economic order based on principles—and an economic order—that no one in the ancient world would have recognized? In large part the answer lies in the influence of three early modern thinkers who, over time, have convinced the western world that life is all about power and (failing that) sex: Karl Marx (May 5, 1818 - March 14, 1883); Friedrich Nietzsche (October 15, 1844 - August 25, 1900); and Sigmund Freud (May 6, 1856 - September 23, 1939).

Their work slowly convinced western scholars that the deeper subtext of our history and our struggles as individuals revolved around those two forces. And, in a world that struggles with the embarrassment of talking about God, the language that all three men used has slowly become the less embarrassing, if not a chic substitute for describing the human predicament.

That's a problem, of course, for anyone who wants to continue talking in theological terms. So the language of Christmas has been transposed to fit the modern categories. Now, in scholarly terms that process of transposition is defended by pointing to a process called "hermeneutics"—a fairly exotic term used in scholarly circles to account for the process of making ancient Scripture relevant to the modern situation. But, as with all tasks, the details matter and here the question is how much of the original story's ending you feel obliged to include in the modern retelling.

One test for judging how faithfully the story has been retold is to ask whether it ends where it originally ended. And the problem with the modern retelling of the Christmas story that focuses on giving power back to the marginalized is that it makes a subplot of the story the plot. If all the ending promises is that power will be given to those who have no power, then the powerless become powerful, and the once-powerful become powerless, and the story has no end. The capacity of the Gospel to embrace people everywhere lies in its focus on the will of God and the coming of God's reign.

Does the gospel invite us to work for justice and mercy, to love our neighbor, and to care for the poor? Absolutely. But doing those things is not the sum and substance of the Kingdom of God. They are the things that people do who believe in the Kingdom of God and anticipate its coming.

It is with the fullness of the Kingdom's coming that the story ends. 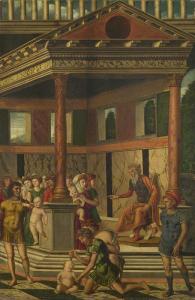 My Facebook Fan Page Has Been Limited For 'Hate Speech'
David G. McAfee
Get Patheos Newsletters
Get the latest from Patheos by signing up for our newsletters. Try our 3 most popular, or select from our huge collection of unique and thought-provoking newsletters.
From time to time you will also receive Special Offers from our partners that help us make this content free for you. You can opt out of these offers at any time.
see our full list of newsletters
Editor's picks See all columnists