Getting Together, or Getting It Out of the Way? 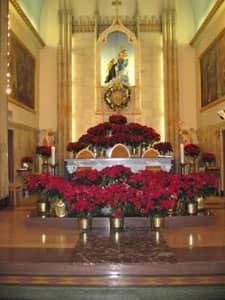 Are we desacralizing December 25th with "Midnight Masses" earlier and earlier the day before? What's your opinion?

Over dinner a few weeks ago, I spoke with a group of five parish priests about something that had me concerned, or at least had piqued my curiosity. What did they think about the shift toward earlier "Midnight Masses" on the 24th as a way of making Christmas liturgies more convenient, especially for families and the elderly?

A few thought that the trend reflected a healthy desire for families to celebrate together at a time when there was less stress, and said that it was a sensitive pastoral response to a real challenge faced by many parishioners; some noted that attendance in their parish on Christmas Day had fallen dramatically; some questioned the long-term effect of the shift to December 24 as the day for worship. Most were realists, though, sensing that parishioners had already voted with their feet, and had moved away from December 25th. "Far fewer people go to Mass on Christmas Day in my parish," said one pastor. "But our afternoon Masses on the 24th are packed." The old joke about the person who calls the rectory to ask, "What time is your Midnight Mass?" is no longer a joke.

What had piqued my curiosity was a comment from a friend last Christmas. "Boy," she said, "I'm so glad I can go to Mass the day before and get it over with!" That sentiment had me a little concerned. Is December 24th the day to "get it over with"?

A little background: There are four Masses that begin the Christmas season, each with different readings: the Vigil Mass, the Mass during the Night (often called in English-speaking countries the "Midnight Mass"), the Mass at Dawn, and the Mass during the Day. My question, then, is not whether the Masses are valid, or whether going to Midnight Mass is a good thing. (They are, and it is.) Rather, do the earlier and earlier Masses—say 8:00, 4:00, and, as I heard recently, 3:00—on the 24th alter our appreciation of Christmas? It's an open question.

To help me understand this, I asked John Baldovin, S.J., professor of historical and liturgical theology at Boston College, and the author of several books on the liturgy, about the recent history of this shift toward earlier Christmas celebrations. "It caught on once we allowed, toward the end of the 1950s and 1960s, the Saturday Vigil Mass. Once that happened, the movement toward earlier Christmas Masses was inevitable."

"But parishes are moving the Masses earlier and earlier," he explained, "and often are using the readings for the next day's Mass. For example, I'll celebrate a 4:00 p.m. Mass on Christmas Eve, and we'll use the Christmas Day readings."

When I was young, there seemed to be plenty of time to wake up early, open presents, eat breakfast, and make it in time for Mass during Christmas morning. But that was forty years ago. By way of updating, and taking something of a random sample, I decided to ask some people on my Facebook "fan page" (an unfortunate name, but it's the public page, as distinguished from the private one). Early one morning, I posted the question about the movement. I was shocked to get almost 140 responses in a few days. (You can find the answers here  on FB.) And people were passionate about it.

Not surprisingly, many spoke about the pressing demands on families at Christmas. One woman wrote, "Many families, like ours, have to travel on Christmas Day to have dinner—we go to [a town] an hour and a half away, to my brother's. Rather than rush through morning Mass thinking about all that, Mass on Christmas Eve is meaningful and beautiful. And without small children, there is nothing to compare with the opening hymn of Midnight Mass, as the procession begins after the long Advent." Another wrote, "I love the early Vigil Mass for the young children and grandchildren. It gives an opportunity during the evening to talk about the Baby Jesus' birth. It certainly does not ‘get it out of the way.' It prepares the way for Jesus' birth on Christmas morning.

A Jesuit friend suggested that the shift to earlier Masses was also a result of rising crime rates in the 1970s and 1980s, when many places were concerned with safety and reluctant to venture out in the dark. That may still be a concern in many places in this country. And elsewhere, too. One woman posted: "In Kingston, Jamaica, where I'm from, my mother is wary of going to Midnight Mass because of the violence in the city. So attending an earlier Mass is convenient for her and safer."