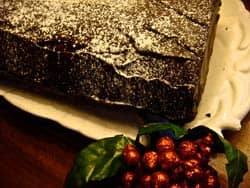 Maybe you are spending Yule alone or celebrating Solstice with your faith community. Maybe you are writing your first ritual or trying to come up with something fresh after years of practice. Maybe with all the stress that seems to be inescapable this time of year you just need a drop of good cheer!

Music
• Willow Firesong’s Pagan Yule Carols -- This site is as old school as it gets and has been around for a very long time. “Away From The Harvest” remains one of my all-time favorites.
• “Cool Yule” by Louis Armstrong -- Sure it’s a secular song about Santa, but I really dig it. Along with Eartha Kitt’s “Santa Baby,” it’s a fabulous example of secular holiday party music. It just makes you happy from the top of your head to your tippy-tapping toes.
• ”The Christians and the Pagans” by Dar Williams -- This describes so many of our holidays, because almost all of us have mixed faith extended families. What we have in common is celebrating with family and friends.
• ”Santa Claus is Pagan Too” by Emerald Rose -- Way back on their first self-titled album you’ll find this merry little tune. Lots of fun! Sing along!
• “Artemis” by Wendy Rule -- Though most Pagan groups tend to focus on the male aspects of Yule (Sun God, Solstice Child) there are plenty of female myths and Yule stories. Regardless of how you frame it, this is the time when the light returns, and as the moon reminds us of the hidden sun, so the Goddess leads us to the hidden God!
• “Here Comes the Sun” by The Beatles -- Everything you need to know about Yule in a nutshell is in this song.


• Hogfather -- There is no more Yule-ish film than Hogfather. Describing the “pagan” origins of this popular Discworld holiday, this silly and fun race to save Hogswatch when the Hogfather goes missing ends with a very Pagan reason to maintain tradition. Plus, Death is as fabulous in this satire of Christmas as he is in all of Terry Pratchett’s Discworld books. Available on dvd and on Netflix for streaming at time of writing.
• The Life and Adventures of Santa Claus -- Okay, so maybe this is the most Yule-ish film of all time. Hark! Be that Cernunnos? Be they fairies? Be they Gods? I love the gorgeous puppets and fun songs.
• Santa Claus: The Movie -- Apart from Dudley Moore and John Lithgow being silly, there is a lot of elf prophecy and elf culture and Scandinavian-ish sets. Good film for little Pagan children to watch!
• The Polar Bear King -- Based on folklore, this film is the story of a king turned into a polar bear. Only with the help of his true love will he be able to break the curse. Great story about love, loyalty, snow, and perseverance!
• It’s A Wonderful Life! -- Pagan religions tend to focus on the power of relationships, and I can think of no other movie that celebrates the power of relationships, loyalty, tribal obligation, and many other Pagan virtues as much as this film does.

Stories
• Frau Holle -- One of Grimm’s fairy tales is a story about Frau Holle, or Mother Hulda, also known as Queen of Witches. It is a typical good girl/bad girl story, revealing that the Goddess doesn’t hold with bad behavior and revealing the origin of snow.
• Cakes and Ale for the Pagan Soul -- Mike Short’s piece on Yuletide makes me cry. Every time. It’s about the power of invoking Santa and the opportunities to help others. Powerful.
• The First Yule -- I’d never read this story before I happened upon it at the Pagan Dad’s blog but it’s absolutely charming.