This is an abridged version without notes; the full version can be found here. 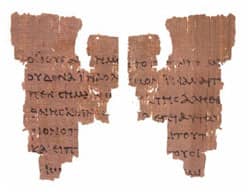 Left: Rylands Papyrus (P 52), front and back, (John Rylands University Library). The oldest surviving fragment of the Gospel of John, dating to around AD 125.

What is the Gospel of John?

When we open the Bible and read the Gospel of John, most people never ask how we actually got it. It's simply there; it's part of the Bible. Of course, what we modern readers hold in our hands is not the Gospel of John, but a printed translation of the Gospel. A translation may be a close reproduction but it is not the original; it is more like an impressionistic painting of a photograph. Modern English translations of the New Testament go back to John Wycliffe in the late fourteenth century, and were originally based largely on the Latin Vulgate (first printed in 1453 by Gutenberg). The Vulgate was the standard Bible of the medieval Roman Catholic world, and was itself a translation. Thus, the earliest modern English readers tended to read a translation of a translation. It was not until the publication of the Greek New Testament by Erasmus in 1516, that knowledge of the original Greek version of John became widespread in Europe. Of course, by this time Greek Orthodox Christians had been reading the Greek New Testament for over 1200 years.

But this situation is even more complicated. Behind any translation of John you read there is an ancient Greek text, and between us and this first Greek text of John are literally thousands of medieval manuscripts. From its original writing nearly 2000 years ago, the Greek text of John has been copied thousands of times by monks, scribes, scholars and priests of the Greek Orthodox Church. Only in the fifteenth century in Renaissance Italy did the Greek New Testament come into the hands of Western European Catholic scholars, who for centuries had largely had access largely to the Latin version of the Bible. In the centuries since the Renaissance, all known surviving medieval Greek manuscripts have been carefully studied, analyzed and collated by scholars, examining every variant reading.

These textual variants have been collated and published in what are called critical editions of the Greek New Testament. The most widely used critical edition is published by the United Bible Societies (UBS). It has an important companion volume which provides detailed analysis and interpretation for every important textual variant in the New Testament. Of course these books are only helpful if you read Greek. All modern translations of John, however, are based on this or other similar critical editions, such as the Nestle-Aland edition. As we shall see, ancient manuscripts of John occasionally have some very significant variants readings.

It is important to note, however, that we do not have the original manuscript of John--that is to say, the actual papyrus or parchment on which John himself first wrote his Gospel. The earliest fragment of John is found on the Rylands Papyrus (P52), discovered in Egypt and dating to around AD 125, containing fragments of John 18.31-33 and 37-38. This is not only the earliest fragment of John, but the earliest fragment of any book from the entire New Testament. There are three other second century fragments of John (P90, P66 and P75), with another twelve papyri fragments dating to the third century. The earliest complete manuscript of the Gospel of John, however, comes from the Codex Sinaiticus and the Codex Vaticanus, both dating to the early fourth century, nearly two hundred and fifty years after the Gospel of John was written.

The Date of the Gospel of John

So, we have a complete manuscript of the Gospel of John from the early fourth century, and nearly two dozen fragments from the previous two centuries. But when was the Gospel first written? Unfortunately, we can't answer this question with any certainty or precision. The Gospel itself does not provide any specific information that allows us to date it. The last datable historical event mentioned in the Gospel of John is the death of Peter. John 21.19 mentions "the kind of death by which [Peter] would glorify God," clearly implying that Peter's martyrdom was already known to John's readers. Since Peter's martyrdom can be dated to around AD 65 at Rome, the Gospel of John must have been written after this date. Empirically, the earliest fragment of John, the Rylands Papyrus (P52) mentioned above, has been dated by paleographers--those who study ancient scripts--to between AD 110-125. The Gospel was thus obviously written sometime before AD 125, and probably several decades before, to allow enough time for the copying of the Gospel and its transmission to early Christians in Egypt. This, then, gives us the latest possible date for the Gospel of John. The range of possible dates for the writing of John is thus from roughly AD 65 to AD 100. Within this broad chronological framework, there are a wide range of theories, with complex arguments and problems for each.