Is Jesus Christ a Myth? Part 3

Editor's Note: The first installmentin this series introduced the question of whether Jesus Christ was an actual historical person or a mythological fabrication, and the second partdiscussed the allegation that the Jesus story is assembled from bits and pieces of pagan mythology. The present installment considers what the letters of the apostle Paul attest about the life of Jesus. 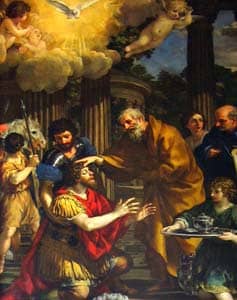 The theory that Jesus never existed started life in pseudo-scholarly circles with the fact that Paul does not say very much about Jesus' life or ministry. The earliest Pauline letters are generally believed to have been written within twenty years of Jesus' death. So, it is instructive to find out what Paul actually did say. With that in mind, here is a list of what Paul had to say about Jesus in his letters, together with the scriptural reference.

It turns out that careful analysis of his letters shows that Paul was not actually all that silent about the historical Jesus at all. The first reaction to all this from the Christ Mythologist is to dispute that Paul wrote very many of these letters. But seven of the Pauline letters are completely undisputed, and all of the facts about Jesus' life listed above come from these seven. It is ironic that the pastoral epistles of 1 and 2 Timothy and Titus, which many scholars insist are late (and date from after the synoptic Gospels), contain practically no details about the life of Jesus at all.

As there are still rather a lot of details about the historical Jesus in the undisputed letters, the Christ Mythologist will use special pleading to try and explain them away, as though Paul himself were constructing the Jesus myth. But as we can see, Paul is not attempting to tell Jesus' life story, he is just using the odd snippet about Jesus where it is helpful to illustrate his point. He knows that his readers are aware of what happened because all of his letters are addressed to people who are already Christians. He is not trying to convert them and he is not engaged in apologetics.

If we look at the letters of the early Christian fathers, they rarely have details about the life of Jesus except in passing because they know their readers are familiar with the Gospels. What we today call the Gospels had not, of course, been written down at the time that Paul was preaching.

However, oral communication was considered to be more reliable than the written word at the time. The people to whom Paul wrote had heard about Jesus already. They did not need a revision primer but specific advice about problems and controversies. Of course, none of this will convince the Christ Mythologist who just cannot understand why Paul does not just repeat verbatim to his correspondents what he has already told them in person.

In short, the silence of Paul about Jesus is something of a myth in itself.

The fourth part in this series, which uses the methods of the Jesus Mythologists to ‘prove' that Hannibal never existed, will be published tomorrow.


12/25/2010 5:00:00 AM
About Kevin Juhasz
Kevin Juhasz is a content manager with a Colorado-based marketing company and the owner of The Write Content, which provides writing and editing services. He has more than 25 years of writing and editing experience with websites, newspapers, magazines, trade publications and more. Kevin has covered news, sports, entertainment, technology and a wide variety of other subjects.