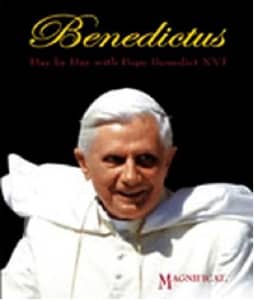 Benedictus is a beautifully produced daybook with 365 excerpts from the homilies, speeches, or writings of Pope Benedict XVI, and it's very useful. Opening it randomly one day, I read this:

The root of man's joy is the harmony he enjoys with himself. He lives in this affirmation. And only one who can accept himself can also accept the you, can accept the world. The reason why an individual cannot accept the you, cannot come to terms with him, is that he does not like his own I and, for that reason, cannot accept a you. Something strange happens here. We have seen that the inability to accept one's I leads to the inability to accept a you. But how does one go about affirming, assenting to, one's I? The answer may perhaps be unexpected: we cannot do so by our own efforts alone. Of ourselves, we cannot come to terms with ourselves. Our I becomes acceptable to us only if it has first become acceptable to another I. We can love ourselves only if we have first been loved by someone else. The life a mother gives to her child is not just physical life; she gives total life when she takes the child's tears and turns them into smiles. It is only when life has been accepted and is perceived as accepted that it becomes also acceptable. Man is that strange creature that needs not just physical birth but also appreciation if he is to subsist . . . If an individual is to accept himself, someone must say to him: "It is good that you exist"—must say it, not with words, but with that act of the entire being that we call love. For it is the way of love to will the other's existence and, at the same time, to bring that existence forth again. The key to the I lies with the you; the way to the you leads through the I.

Reading this broke my heart a little, as I considered people I have known who have gone their whole lives waiting to hear from someone, "it is good that you exist."

Now in our own day . . . it is always in the name of good, of freedom, of concern for mankind that people are enslaved and murdered, deceived, lied to, slandered and destroyed. "Every evil screams out only one message: 'I am good!'" And not only does it scream, but it demands that the people cry out tirelessly in response: "You are good, you are freedom, you are happiness!"

I knew a man who was a "menopause baby"—a surprise to his mother, who had thought she had a tumor. He was born two weeks after the woman's granddaughter. As his mother had no intention of giving up her job and life to begin again with a baby, she allowed her daughter—the man's sister—to raise him along with her own newborn daughter. So, uncle and niece, born during World War 2, were raised as brother and sister. This man called his sister, "Mom," and his mother, "Grandma," and his father, "Grandpa."

When he was 6 or 7 years old, and it became unsettling to have to explain to schools and new friends why this brother and sister had different surnames, the boy's real father went to his daughter's husband and said, "why don't you adopt him, you're raising him anyway?"

The husband replied that since the boy was this man's only son, he did not wish to see him lose the family name.

I think the husband probably believed he was doing something honorable. In retrospect, perhaps he should have adopted him, and given the boy his name. That would have been an affirmation, a way of saying to him, "you belong here; we want you." Instead, the message he received was "they didn't want you and we don't really want you, either."

This man lived a very unhappy life; despite a lively exterior, the pain in his eyes could be read like a 400-page Russian novel. He attempted suicide several times and finally died not long after being treated rather cruelly by the woman who had been raised as his "sister," as she managed to communicate one more time that he did not belong.

I suspect that if you do not get the message early in your life that "you belong here and it is good that you exist," then no matter how successful you are later in life, and even if you manage to marry someone who truly loves you, it is still very difficult—without either a miraculous faith-experience or the hard work of therapy—to wholly put aside what you learned as a child: that you were inconvenient, that you were unimportant, that whether you were here or not did not really matter, to anyone; lessons that prohibit the building of a healthy you, forged by a loving I.

When I pray for President Obama, I always pray for him, as president—that he be open to God's guidance, given wisdom, and so forth. But since reading that excerpt, and pondering the sad life of the man I knew, I have tried to pray also for Barack Obama, the little boy, rejected of the father, intermittently sloughed off by the mother, born in an era when bi-racial children were looked at with wondering eyes.