Searching for Faith Amidst the Ruins: An Interview with Haiti Partners Founder Kent Annan

Editor's Note:  On the one-year anniversary of the devastating Haiti earthquake, Patheos and InterVarsity Press are hosting a Book Club on the new release by author and activist Kent Annan called After Shock: Searching for Honest Faith When Your World Is Shaken (InterVarsity Press).  Click here for more resources on the book, including a discussion with noted bloggers and scholars on the larger themes of doubt and hope in the midst of suffering.

The following is an excerpt from a Patheos interview with Annan last year by Timothy Dalrymple, in which he describes his work with Haiti Partners and how his ministry has changed since the earthquake. 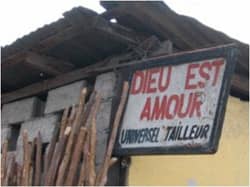 Kent Annan is co-director of Haiti Partners, a non-profit devoted to serving and strengthening Haitians through education.  His first book, Following Jesus Through the Eye of the Needle (InterVarsity Press), recounts his move to Haiti and the joys and trials of ministering in the deep trenches of the world.   His second book, After Shock: Searching for Honest Faith When Your World Is Shaken (InterVarsity Press), recounts his faith journey since the earthquake one year ago.

Can you tell us about the history and vision of Haiti Partners?

We had four schools.  Three collapsed in the earthquake.  We have teacher training, training about 300 teachers per year.  We have an intensive leadership program, with forty community leaders from throughout the country.  Then we have a disciples program, that this year will see 10,000 people receive Bibles as well as training in Bible study materials, in order to help their churches through better education.

How has your ministry there changed since the earthquake?

Everybody who was there doing ministry suddenly became a relief organization to the best that they could.  So for the past five weeks we have been trying to get money to people, so that they can get the basics of food, water, shelter, and health supplies.  We've taken a medical team down to Haiti.  We're discerning the ways in which we can help our people and the communities we are involved with immediately.

That's transitioned in the past week or so.  Recently we launched children's activities at three of our four schools.  So, beside the schools, they are under tarps doing coloring and singing and other activities that are really positive for them.  This is a key transition after a disaster—getting children not straight back into school, but back into a routine of positive activities.

And next week we'll be breaking ground on at least two new learning centers.  This will create construction jobs, as the Haitians themselves will make a building they can use as a school and also as a shelter in the rainy season.  It will take eight weeks to build and will create over 100 jobs, and then eventually it will provide a place for school activities as well as for people to sleep who are homeless right now.

You said that three of the four school buildings collapsed.  Was anyone in the buildings when they collapsed?

No, fortunately, since it was afternoon, almost five o'clock, nobody was in any of the schools.  We're really grateful for that.

Stories about Haiti have begun to fade from our television screens.  The number of the dead is staggering.  There was great need at the beginning to meet basic needs.  Do you feel as though you have gotten through the worst?  Are the most immediate needs satisfied by now?

There are all kinds of concerns still about food, water, shelter.  With hundreds of thousands of people homeless, sleeping out under sheets or tarps, public health officials are worried about infectious diseases.  There are definitely all kinds of urgent needs, and it seems like few organizations have the capacity of something like Red Cross or World Vision, with immense resources (which is fantastic) that they can pour into the immediate needs.