Shani Oates: Maid of the Clan of Tubal Cain, Part 2

Editor's Note: The Clan of Tubal Cain is part of the Cochrane traditions of Witchcraft, which include the 1734 tradition. For more information read about the founder, Robert Cochrane, and the 1734 tradition. This interview was originally published by Penton Independent Pagan Media and is reprinted with permission. The first half of this interview can be found here. 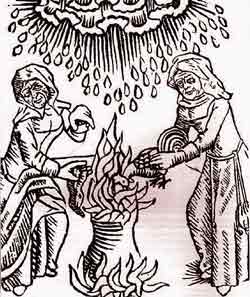 What do you understand the ultimate goal or purpose of Witchcraft to be?

We of course have the Covenant, a Law that binds the people to it, a concept of destiny achieved through surrender. This concept of destiny, our goal or Grail if you like, could be expressed as the purpose of our Craft. Again, you have highlighted a primary divergence from Paganism and especially of neo-Paganism. Robert Cochrane avoided absolute classification, regarding each term—witch, pagan, sorcerer, or occultist—as pejorative, vague, and self-limiting, and all negating the latent spiritual aspects of his Craft. Instead he preferred Pellar, which for him implied a priest of the people. For him, priest was used in the fullest sense of the word, not as a title of a man working within a morally, spiritually, and ethically bankrupt orthodoxy, but in the archaic sense of a master of destiny, a controller of fate, a rider of the hidden realms, a shaman and medicine man, a seeker and preserver of all wisdom.

The Truth is perceived only by those who earn it, not in an elitist egotistical manner, but by singular dedication and objective surrender to the ineffable. Gnosis is imparted in the oneiric realms wherein the seeker is seduced to remain. This ‘other world' is all we would wish it to be and yet, if we fail to return to these realms to effect its manifestation, we have defaulted the alchemy of transmogrification. This balance, its comprehension and maintenance constitute the true work of a Witch.

Where we are going and how we move forward is quite meaningless unless we learn how we arrived at this juncture; in other words, why is there such variety in the beliefs and practices of Witchcraft today, if all it ever professed to be was maleficent sorcery? Surely, there must be something we have missed? There is! You see, Witchcraft in Britain never was based in the Western or modern revival of classical paganism, though its roots are sourced from within Northern, Heathen, and to some extent, the classical past, from a time when magic and religion had not yet been separated. In fact, many of today's magical practices, especially those regarding divination, necromancy, and sorcery find their origin from within the antique world of the 2nd millennium B.C.E. in the Middle-Eastern regions of Mesopotamia. Traditional Craft is rooted in that multifarious antique world, preserving the tenets and principles of its archaic religious mysticisms.

The Craft remains the pattern by which we set our lives and the means to effect change within it. It is primarily of the people and as such it must reflect the needs and purpose of its practitioners. Although historically and traditionally the Craft has been championed as a repository of the sorcerous arte and of cunning, I, like my direct predecessors, believe the Craft maintains deeper secrets, of subtle yet perceptible gnosis within its rites and philosophies, all of which reveal the legacy and vestiges of an ancient wisdom. Alchemical formulae may be gleaned from its arcane praxis, hidden yet salvageable.

Thomas Aquinas, a medieval church theologian, said "God's existence can be grasped by unaided reason, but knowing his nature requires the grace of revelation." Plato also believed that only what is eternally true can be properly said to be known—all else is flux. Agrippa described magic as a faculty of wonderful virtue, full of high mysteries and containing the most profound contemplation of secret things.

Clearly then, magical rituals should entail greater things than winning fortunes, raising demons, or blasting enemies; we should be engaged in the raising of the soul beyond such materially motivated trivia. The synaptic gap between ourselves and divinity is not breached by our acquisitions, by having more, but by becoming more, by conscious expansion of a subconscious process. In this way we swell our capacity of being within the One. No one can be taught the secrets of occultism; these are yielded in force not form, and these must be experienced by each individual aspirant. No book or word exists that can reveal these secrets.