Spirituality Is a Two-Way Street: (or Suck it up, Buttercup, Part II)

Recently I was asked by a friend and colleague to write a follow-up to my article "Serving the Gods, or Suck it up Buttercup," which was published here at Pantheon on July 2, 2010. Both of us have been encountering more and more people, usually as clients, sometimes as colleagues in crisis, who are making some very serious and potentially harmful spiritual errors. We're the ones called in to help sort it all out, and sometimes that leaves us at a loss.

Sometimes we ourselves have fallen into error as well and find ourselves having to seek out our own elders in order to be sorted out. As a Heathen priest, my theology lacks a concept of sin, mortal or venal. What we do have is debt and wyrd, offense, and falling out of right relationship or balance with our Holy Powers, our ancestors, our communities, ourselves. We have the concept of frith, usually translated as ‘peace,' better translated as ‘right order'; and we have an obligation to restore balance once it is sundered. For those in a committed relationship with one of the Holy Powers, those truly committed to honoring their ancestors properly, those who want to grow in love and respect for the Holy Powers, and those who want to develop strong and resilient spirituality wherever that may lead, there is the obligation of service as well.

So how many triggering words did I use there: obligation, service, offense, error? To say that one might be out of balance with one's Holy Powers, to say that one might be in error, implies that there is a right way and a wrong way to go about this thing called religion. Much to the dismay of all those steeped in the values of post-1960s cultural mores (myself included sometimes), that would be correct. That, of course, raises all sorts of nasty questions about control and hierarchy and who has the right to point the finger and set standards.

Any shaman, priest, or god-servant worth his or her salt would give a very simple answer: The Holy Powers Themselves do, with the ancestors not far behind; and doesn't that just open up a whole new can of worms? We really do make spirituality so much harder than it has to be. Perhaps it's simply pure human cussedness but I think it's a bit more. I think that the idea of service, of knowing one's place, of unswerving commitment, of moving beyond what feels good into doing what is right has not only fallen out of fashion in our culture, but has become intensely, sometimes rabidly devalued. We pay the price for that every single day, every time we cut ourselves off from the blessings and joy of being in right balance with our Gods.

I've often been accused of emphasizing the duty and obligation and struggle yet not sharing what I myself have experienced as the blessings of service. It feels so much like boasting, and so much like tempting fate with my pride that even now I hesitate to speak of all that I have been given. But I will say this: the Gods have poured blessings into my hands, more than I ever thought to receive, more than I ever believed it possible to receive for no other reason than that I love Them and try very hard to serve Them cleanly, consistently, and well—as well, in my human condition, as I can comprehend. I am grateful beyond my ability to express. There have been challenges, struggles, difficulties as in any other relationship but commitment to duty and obligation has seen me through.

The concept of duty is a joyous thing for me and in that, I think that I am very, very lucky. It's one less issue I have to battle within myself. It was a very long time before I truly understood that for many, the blessing of duty was not enough of a reason to do anything. It's been a real grace in that this one thing rarely prompted any internal battles (other things did and do, mind you. I didn't get off scott free by any means!). Coming from a military family as I do, I was horrified. Feelings come and go. Belief can be influenced by so many things from indigestion to depression to lack of sleep, but duty and doing the right thing: that is unchanging.

I think part of the problem is that as a society, we're too much in our heads. Blame it on the Enlightenment, I suppose and the deification of science. Serving the Gods, having a connection to the ancestors and Holy Powers . . . that's not in our heads. That's in the gut, in the blood, in the bone, in the deepest part of our hearts. It's in the mess and all those stubborn emotions that (pseudo)-rationality would deny. Then too, literacy has been a tremendous blessing and so has education but too often so many of us want to read something or put a name on something and then we think we've accomplished something useful when in reality it doesn't work that way. We've just created one more reason, with all our delightful taxonomies, to avoid doing what we should have been doing in the first place: showing honor to the dead and to our Gods. Why do we need names for what we do? Isn't it enough to simply commit to doing what is asked and doing it well? And for anyone who thinks that we don't need the Gods or the dead, look at the world. How well is being out of right relationship with Them working for you? Hmm? 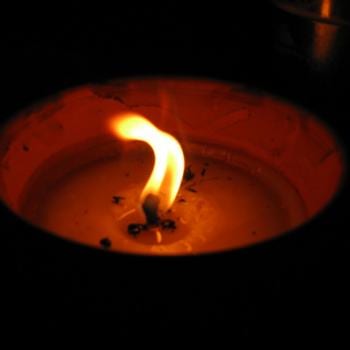 Practices From the Inside Out: Is It Lent Again Already?
Greg Richardson
2

So Much Love, Fear is Gone, Joy is Possible
John Mark N. Reynolds
4

The Ethics of Love Spells
Jessica Ripley
Get Patheos Newsletters
Get the latest from Patheos by signing up for our newsletters. Try our 3 most popular, or select from our huge collection of unique and thought-provoking newsletters.
From time to time you will also receive Special Offers from our partners that help us make this content free for you. You can opt out of these offers at any time.
see our full list of newsletters
Editor's picks See all columnists