Skeptic: Okay, but I mean, that's not the Church, that's Twitter. You're not saying the Twitter community is the body of Christ, are you?

Tweep: No I'm not, but I'm saying the Twitter community is one way—and a very helpful and cool way—of experiencing, showing, and living out those connections of our Church-connected theology.

And it works with the time thing, too. Sure, Twitter works within our cultural notions of time, but watching a Twitter feed also reminds me that not everyone is in my time zone or life stage or weather patterns. It may seem elementary, but for me, seeing a tweet from a friend in South Africa going to a warm beach at Christmas right below a tweet from someone in Idaho digging out from a snow storm reminds me that my life is not the center of the world. And, because the Twitter stream flows at all times and all places even when I don't check on it, it's a helpful push to think beyond myself. Watching my Twitter feed gives me what some have called a "peripheral awareness." And this awareness of others, for me as a religious and spiritual person, strengthens and deepens my faith journey.

Skeptic: Dude, you're starting to sound a little too new-agey for me. I mean, you don't believe in Twitter do you? Sounds like it's become an idol in your life.

Tweep: No way, man. I think of it this way. We don't actually believe in the Church in the first place. Or maybe a better way of putting it is saying, "In the Church, I believe." The point is that we believe in God, and we do that while in the Church.

Skeptic: Okay, that makes sense. Glad you didn't go off the deep end on me here. Sure, I mean, there are some similarities between a theological conception of Church and Twitter, but it still doesn't exactly redeem it for me. Is that all you got?

Tweep: Well there's this big theologian guy Dan Migliore who's written about different models of the Church and several of them apply really well to Twitter too. Migliore talks about the Church as an "intimate community of the Spirit"—Twitter can totally be majorly intimate in its connections. Also, Migliore says the church is a "herald of good news"—Twitter is all over sharing news and information, and a lot more is good than you'd think. And Migliore also says the mystery of the Church can't ever be described in one image or model (that's part of the reason the Bible has so many different images for Church). So, I guess I'm saying, for me at least, Twitter is one more model or image that helps me understand the Church. If you don't buy it, fine, but I think the Spirit can work online just as well as it can old school.

Skeptic: No doubt about that, at least. Thanks for the chat, I'll think on it some more, that's for sure. Maybe you can ask your Twitter friends to pray for me.

Tweep: Will do, and better yet, I'll write up this conversation and put in on Twitter, so we'll get some feedback from the Church, I mean, the Twitter community. Will you drink to that?

Mainline Christianity on the Web: Promise or Pitfall?

Ten Thoughts on the Convergence of Technology and Church 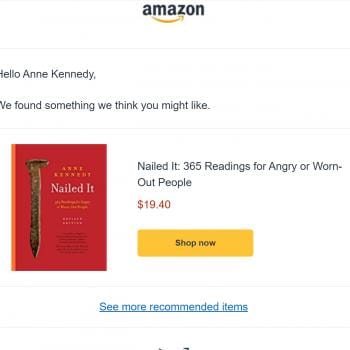 All Those Algorithms
Anne Kennedy
4

Christian Evangelist: Biden, Who's "Not the President," Is Blocking Prophecy
Beth Stoneburner
Get Patheos Newsletters
Get the latest from Patheos by signing up for our newsletters. Try our 3 most popular, or select from our huge collection of unique and thought-provoking newsletters.
From time to time you will also receive Special Offers from our partners that help us make this content free for you. You can opt out of these offers at any time.
see our full list of newsletters
Editor's picks See all columnists