The Prologue to John is one of the most intriguing and enigmatic passages in scripture. It also introduces a number of important concepts for John, so I'll examine it in some detail. The Prologue has a quasi-poetic structure; some scholars think it is an early Christian hymn quoted or written by John. It can be divided into four sections, each with its own interlocking theme:

In today's column I'll examine the first section, saving the next three for next week.

When modern readers approach the Prologue we almost always do so with the foreknowledge that John is talking about Jesus Christ. However, the earliest 1st century readers would not necessarily have known this. Read John 1:1-18 aloud while setting aside your presuppositions about the text. Imagine that you are a Jew, and don't know this is a Christian text, nor that it is part of the New Testament, as it obviously wasn't yet when John first wrote it. What would you make of the Prologue?

At first it would sound like a mystical midrash (Jewish method of study/interpretation/exegesis) of Genesis 1. All of the major motifs of John 1:1-5—creation, life, light and darkness—can also be found in Genesis 1, but in John the creator is mysteriously described as "the Word." Then you would see this strange interruption about a prophet named John testifying of the Light (1:6-8) . . . but who is this John? Finally, in 1:14, the Word becomes flesh! That, for the average Jew, would be strange enough. But 1:17 provides a further shock: there is a grace and truth superior to the Law of Moses? And this grace and truth comes from Jesus the Messiah? So you conclude this is one of those Messianic apocalyptic texts. Would you keep reading? Has John piqued your interest enough to move you beyond your natural skepticism about this so-called messiah Jesus?

When John writes, "in the beginning was the Word," he is not being very helpful to modern readers. But then, he didn't plan to be. The English term "Word" in John 1 translates the Greek term logos. In the ancient world, logos had a broad range of meaning such as "word, utterance, declaration, discourse, or reason." John, however, uses the term in a very technical sense as a title for the Messiah in a preexistent divine state. Why would John have called Jesus the "Word," since it is not an obvious title for God or the Messiah in the Hebrew Bible, or even in other early Christian writings? (Only John calls Jesus the Word.) What would 1st-century Jewish readers have thought when they encountered this "Word" as a divine being in John 1:1?

The idea of the divine Logos found in John 1 seems to be related not to the Hebrew Bible, but to Jewish theological interpretations and speculations that developed during the 2nd and 1st centuries B.C., which can be found in some non-biblical Jewish writings of that period. Many of the ideas found in these texts would have been familiar to John and his ancient audience, but are generally unknown to modern readers. Various scholars have proposed a number of possible antecedents to John's Word theology, including: 1) the idea of the "Wisdom of God" as God's co-creator; 2) Hellenistic logos philosophy as reflected in the writings of Philo of Alexandria; and 3) the idea of the memra/word in the Aramaic translations (Targums) of the Hebrew Bible. Of course, it is possible that all these concepts were intermingled in John's understanding of the Word. Let me briefly introduce these ideas.

Wisdom. Certain passages in the Hebrew Bible were understood by some early Christians as describing the Christ's participation in creation, and may have been so understood by John. For example, Psalm 33:6 tells us: "By the word (dābār) of YHWH the heavens were made." Likewise, many early Christians saw descriptions of the participation of God's primordial Wisdom (Hebrew: ḥākmāh; Greek: sophia) in creation as referring to the preexistent Jesus. These interpretations derive especially from Proverbs 8:22-31, where a personified Wisdom describes its co-participation with God in creation. Should this be interpreted as an allegorical poetic personification, or does it refer to an actual divine entity, a co-creator with God as described by John?

Intertestamental Wisdom literature expands on this theme. Descriptions of creation by divine Wisdom in Sirach 24 exhibit many parallels to the Logos creation ideas in John. Elsewhere the book of Wisdom declares: "O God of my ancestors and Lord of mercy, who made all things by your word, and by your wisdom formed mankind"(Wisdom 9:1, 9, cf. 7:22, 18:15). Here word and wisdom could be interpreted as being different names for a single participant in the creation process. Early Christians saw these descriptions of Wisdom the Creator as references to Christ as the Wisdom of God (1 Cor. 1:24, 30). In their original ancient context these texts probably simply meant that God created by speaking a word, precisely as described in Genesis. However, eventually God's spoken Word becomes understood by some Jews as a personified divine or angelic being, as reflected in these descriptions of God creating through his personified Word or Wisdom. On the other hand, John actually never uses the term wisdom/sophia in his Gospel. Is this intentional? Or does he intend to equate the Word with Wisdom even though he never uses the term Wisdom?

Love in a Time of Tribalism
Dan Peterson
4 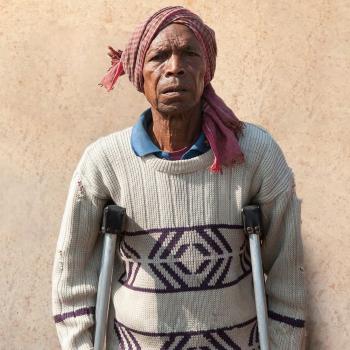 Global Pandemic Worsens the Hardships of Leprosy Patients (Part 1)
GFA Staff Writer
Get Patheos Newsletters
Get the latest from Patheos by signing up for our newsletters. Try our 3 most popular, or select from our huge collection of unique and thought-provoking newsletters.
From time to time you will also receive Special Offers from our partners that help us make this content free for you. You can opt out of these offers at any time.
see our full list of newsletters
Editor's picks See all columnists