Broken and Mended on Valentine's Day

One Thursday while getting ready to leave for Bible study, I was busily thinking about all I had to do before I could head out. Suddenly I heard that "still small voice" in my mind say, "I will never leave you nor forsake you." It stopped me in my tracks and I thought, "Wow, where did that come from?"

It wasn't my own thought. I was thankful to have received it, but didn't understand why.

A week later, however, I did understand. I discovered very serious, very hard things about my first marriage, which I had been completely unaware of. I fought to save my marriage, but my then-husband filed for divorce. My life began to fall apart.

I received the final divorce papers a week before St. Valentine's Day, and learned that my ex-husband was already getting remarried.

That was a rough Valentine's Day. I had divorce papers I hadn't wanted. I was a single parent. There was a temptation to despair. But that became a day of blessings I won't forget. Opening my eyes to face a difficult, emotional morning, I asked the Lord if He would be my "Valentine."

It was just a thought—a pain-filler. My proposal started out as a way to just "get through," but it became more than that. I decided to make special plans for Jesus, my Valentine. The more I thought about it, the more an idea took shape, and I looked for little extra-special gifts of myself that I could give to the Lord that day in my prayer life, in my devotions, and in my interactions.

Later that morning a friend of mine called to ask if we could go out somewhere, with the kids. I felt a little silly telling her the reason I wanted to stay home, so I just said that I was busy. She practically begged me to go with her and finally I agreed, because she sounded like she needed to talk. We took our three boys, all between ages two and four, to McDonalds, and as we watched them play, she thanked me for agreeing to come out with her.

"I just didn't want to be alone today," she said. "My grandmother is dying, and we don't think that she will be around much longer." I knew then that being present to my friend, and listening to her, was what Jesus wanted me to do for Him. "Truly I tell you, whatever you did for the least of these brothers and sisters of mine, you did for me" (Mt 25: 40).

I said that I would pray for her grandmother, and for her, and she seemed very consoled. Suddenly I was so happy that I was there, so glad I had obeyed a call.

Later that afternoon the phone rang again. This time it was another friend saying she wanted to bring me something. Catherine explained that she could only stop for a second. When she knocked at the door, she said, "I am in a hurry, but I have felt the Lord nudging me all day to bring you this." She handed me a small white ring bearer's pillow complete with two toy wedding rings tied with a bow. She had made them for a women's retreat she was busy preparing, with the theme, "The Bride of Christ."

It seems she had this one pillow left over, and all day long, although she was very busy, she had been puzzled by the nagging feeling that the Lord wanted me to have it.

That's when I got emotional. I told her about my Valentine's Day proposal, and she understood. Suddenly Catherine, too, was so glad to have obeyed a call!

The Lord accepted my request, and now he had sent me a Valentine in return! He was fulfilling His promise, "...and the Lord, He is the one who goes before you. He will be with you, He will not leave you nor forsake you; do not fear nor be dismayed." (Deut 31: 8)

A few years later, after much prayer and consulting with my Pastor, I pursued an annulment of my first marriage, which was granted.

An annulment is not an easy process. It is a very close examination of the relationship; of the spirit, honesty and maturity that was brought into the marriage. Deep scrutiny is needed, because it is a serious thing to determine whether a marriage was a true, sacramental and covenanted union from the beginning. To receive an annulment does not mean the marriage wasn't legal. It means the grace-conferring sacrament was absent from the union, due to impediments that were either unknown or unacknowledged at the time of the wedding. I realize that there is much misunderstanding about this, both within and outside the Catholic Church (and that's a subject, perhaps, for another day). For me, though, this cleansing, healing step was what I needed in order to move on with my life.

And happily, in time I was able to move on. Several years later, the Lord gave me the wonderful gift of my husband Ed, in a true sacramental marriage.

We were married on a Saturday after Valentine's Day!

And that little pillow my friend Catherine felt so nagged into giving me all those years ago? I still have it; it sits on our dresser.

A true Valentine is forever.

A Martyrdom Of Our Own Making
Guest Contributor
2 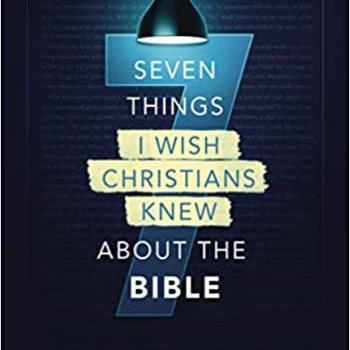 The Vision: One Final Look
Libby Anne
Get Patheos Newsletters
Get the latest from Patheos by signing up for our newsletters. Try our 3 most popular, or select from our huge collection of unique and thought-provoking newsletters.
From time to time you will also receive Special Offers from our partners that help us make this content free for you. You can opt out of these offers at any time.
see our full list of newsletters
Editor's picks See all columnists