Evolution Weekend: Debunking the Myth of the Religion-Science Conflict 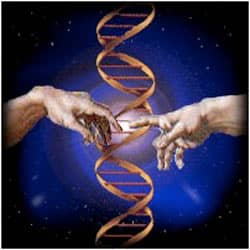 Much, indeed some will say too much, has been written about the conflict between religion and science. Unfortunately, though, the sheer volume of the rhetoric on the topic seems to have replaced any meaningful content.

And make no mistake about it—much remains to be said both from a historical and from a contemporary perspective. In fact, the position that is most commonly articulated, that religion and science are and must be in conflict, is neither historically nor currently supported by the evidence. The fact that those on both ends of the spectrum, both the religious right and the self-proclaimed "new atheists," have honed in on the same message should be enough to give us pause. When groups this disparate come to the same conclusion, and when in doing so they both believe they are advancing their own agendas, a closer look is obviously necessary.

A good place to begin taking that closer look is with a fascinating book edited by Ronald Numbers, a University of Wisconsin historian of science specializing in the interface between religion and science. In Galileo Goes to Jail and Other Myths about Science and Religion, Numbers attempts to set the record straight right at the outset. His very first sentence sets forth his main thesis: "The greatest myth in the history of science and religion holds that they have been in a state of constant conflict."

Numbers goes on to argue that the belief that these two fields have been at war forever largely arose from two books published in the 19th century. In 1874 John William Draper published History of the Conflict between Religion and Science, which built on the work of Cornell University president Andrew Dickson White. A bit later, in 1896, White himself produced his massive, two-volume opus entitled A History of the Warfare of Science with Theology in Christendom.

As with most myths, there is a kernel of truth in Draper's and White's accounts. But, as Numbers says, "Historians of science have known for years that White's and Draper's accounts are more propaganda than history." Both, as Numbers explains, were promoting personal anti-religious agendas and both were engaging in hyperbolic, but very persuasive, rhetoric.

The problem with most myths, indeed, the thing that makes them powerful, is that they are so absolutely believable. And their believability, in the minds of many, can substitute for their truth. Today, for example, as Numbers points out, "The secular public . . . knows that organized religion has always opposed scientific progress. . . . The religious public knows that science has taken the leading role in corroding faith."

Knowing something to be true, however, isn't the same as that thing being true. It turns out that a vast cross-section of both the religious community and the scientific community is actively engaged in dispelling the myth of conflict between religion and science. I know this to be the truth from my personal experiences as founder and executive director of The Clergy Letter Project, a grassroots group of more than 14,000 religious leaders and scientists representing all corners of the globe.

Although disagreements between religion and science most often seem to center on the theory of evolution, the ordained members of The Clergy Letter Project have absolutely no problems reconciling evolution with their faith. For example, almost 13,000 Christian clergy members have enthusiastically endorsed the following simple statement: "We urge school board members to preserve the integrity of the science curriculum by affirming the teaching of the theory of evolution as a core component of human knowledge."

More than that, for the past five years, hundreds of religious congregations representing Christians, Jews, and Muslims in twenty countries have joined together to celebrate an annual event called Evolution Weekend. This year, on the weekend of 11-13 February, the sixth annual Evolution Weekend will occur and, again, hundreds of congregations will find ways to raise the quality of the dialogue about the compatibility of religion and science while demonstrating, via their actions, that the myth of warfare between the two has little basis in reality.

This particular weekend was selected because it coincides with the birth of Charles Darwin (February 12, 1809) and participants thought that there could be no better time to demonstrate the ways in which a mature and robust relationship between religion and science might take place. During Evolution Weekend participating clergy often preach about the compatibility of religion and science while congregants often engage in deep discussions on the subject.