Interview with Thor Halvorsen, Activist for the Rights of Deaf Pagans

I first met Thor (and yes, that's his birth name, folks) at the "Changing Times, Changing Worlds" conference this past November. He was teaching a fascinating class on ASL (American Sign Language) and Paganism and after meeting him earlier in the day and discussing his work and some of his ongoing community concerns, even I, in no possible way anything approaching a morning person, had to take his 8:30am class the following morning. It was an enlightening experience.

Part of reclaiming our sacred traditions means reclaiming language. Most of us are engaged in this process without even being consciously aware of it. Do you call yourself a "Witch," a "Heathen,' a Pagan?" Well, in doing so, you are reclaiming a sacred identity, using words that at one time were very much the religious equivalent of the 'N-word.' You are reclaiming concepts and practices long condemned not just to historical oblivion, but to excoriation. It is a radical act and by using these words we remind ourselves, every single time we consciously name and identify ourselves thusly, that we are in the process of restoring something sacred and essential; that our Gods and our ancestors and the traditions surrounding them have not been forgotten.  It's a good and necessary starting point, but there is much more to work to be done.

There is a tradition within many schools of magic that teaches that to name something is to bring it into being and I think there is a great deal of wisdom in this, because the opposite is also true: if you don't have words by which to conceive, frame, and communicate an idea then how can you ever manifest it fully?  One of the problems that we face as we work hard to restore our sacred traditions is the paucity of our language in framing concepts central to our practices and sometimes even the practices themselves. Many words (for instance the Norse word that encompasses the job we now call 'shaman') have been lost to history. Many other words now have radically different meanings, oftentimes negative ones. Sometimes words are too deeply connected to monotheism now to be easily repurposed (I have seen many a Pagan and Heathen struggle with the word 'prayer' because of this).  Many of our ancestral cultures were predominantly oral and words referring to aspects of non-Christian sacred traditions were never recorded by the Christian scribes and monks who followed. History truly is written by the victors and the language they use shapes our later understanding. As I've said before, language has power. Language defines the way we think; it defines our worldview; it defines the way we relate to our world and everything in it. Take away our words, silence our voices, and we can all too easily be rendered powerless.

Until I met Thor, I didn't realize how deeply this issue affected Deaf Pagans and Heathens. He taught me much about the intersection of language and identity, representation and culture. I am awed by his courage in attempting to navigate and bridge those often treacherous interstices. Needless to say, I was delighted when he agreed to be interviewed for "Road to Hel."

This interview was conducted via email on January 24, 2011.

Thank you so much, Thor, for taking the time to share your thoughts with my readers today. I like to start by asking folks that I interview for a little background on their spiritual journey. How did you first come to Paganism?

I came to Paganism through being disheartened (but not prejudicial, or anti-Christian) with my birth religion for the actions done in the "name" of God/Jesus. I also felt there was something more, and I was always drawn to stories, be it fables, mores, folktales, or "mythologies" I really feel this word was a concept derived to downplay the importance of other belief systems. I think it's been used to pigeon-hole them as being "non-religious" to ensure that they are not "accepted" and to dismiss them on the grounds that they are not "live," i.e. "still practiced." It's a term used to relegate these faiths to the past tense and to the category of "less-educated" and "less civilized" however incorrect that may be. Well, let's just say, the saying about cats goes true with the Pagan gods and goddesses: We may have forgotten that they were worshiped, but they haven't forgotten.

I also felt very disheartened with the whole "not of this world" attitude that prevailed in my birth religion. By that, I mean the apathy about what harm we as a society are doing to this world. It bothered me to see so many fundamentalists who gleefully get excited thinking the destruction of society points to Jesus' return when in reality, it's more like that destruction is only hastening our own demise. Furthermore, I've always felt very attached to nature, often playing in the forest across the street from where we lived, seeing the trees as being alive, having spirits, their branches "making faces" at me.

Witch, You Vex Me
Jason Mankey
4 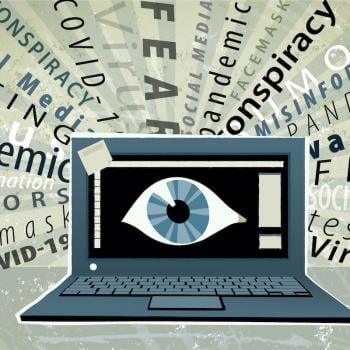 Snopes Announces The Winner Of Its Fake News Award
Andrew Hall
Get Patheos Newsletters
Get the latest from Patheos by signing up for our newsletters. Try our 3 most popular, or select from our huge collection of unique and thought-provoking newsletters.
From time to time you will also receive Special Offers from our partners that help us make this content free for you. You can opt out of these offers at any time.
see our full list of newsletters
Editor's picks See all columnists