The Jewish Roots of the Eucharist: An Interview with Author Brant Pitre 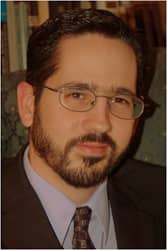 Author Brant Pitre is a professor of sacred scripture at Notre Dame Seminary in New Orleans. He received his Ph.D. in New Testament and ancient Judaism from the University of Notre Dame, Indiana and is the author of Jesus, the Tribulation and the End of Exile. In anticipation of our Book Club discussions on his just-released Jesus and the Jewish Roots of the Eucharist, Pitre and Catholic portal managing editor Elizabeth Scalia discuss a few of the startling and fascinating aspects of Judaism in the first century, and how directly they speak to and enhance our experience of Holy Communion.

Mr. Pitre—let me begin by telling you that I love this book. It provides exciting and fresh perspectives into the Eucharist that will promote deep conversation, contemplation and, I pray, conversion in the hearts and minds of many. Your effort to consider Jesus' teachings on the Eucharist within context of his life in 1st century Palestine has yielded some fascinating information and insights. Reading, for example, that Passover lambs were placed into a quasi-cruciform position at the sacrifice was a stunner. What particularly surprised you in your research, and how did it affect/change your overall understanding of the Eucharist?

I'm glad you found it as fascinating as I did! For my part, two discoveries stand out.

First, there was the one you mentioned—the 'crucifixion' of the Passover lambs in the Temple after they were sacrificed. Discovering this entirely transformed the way I hear the Gospel account of Jesus sending Peter and John into the city of Jerusalem on the day the lambs are sacrificed to "prepare the Passover" (Lk. 22:7-13). The thought of Jesus himself, year after year, seeing thousands of crucified lambs, and, in his final year, knowing that he would suffer the same fate as the Lamb of God who takes away the sin of the world took my breath away. What must have he thought when looked upon the slaughtered lambs?

Read the complete first chapter, here
Additional review and discussion of the book.

Second, my personal favorite is the chapter on the Bread of the Presence. This mysterious bread, which was kept in the Tabernacle of Moses and later in the Jerusalem Temple, is consistently overlooked by Christians, because it's tucked away in the dreaded book of Leviticus! Yet it is easily one of the most transparent foreshadowings of the Eucharist in the Bible. I will never forget the day when I was reading the Jewish Talmud and discovered that the priests in the Temple used to take out the Bread of the Presence at the festivals, elevate it in the sight of the pilgrims, and proclaim: "Behold, God's love for you"! Could you ask for a clearer parallel with the elevation of the Eucharist in the Mass, what Pope Benedict has called the "Sacrament of Charity"?

The whole section on the Bread of the Presence is riveting, but when I read that the golden table and the Bread of the Presence would be displayed to the people, it matched so perfectly the experience of the Holy Eucharist being elevated at Mass—and especially at Benediction—that I experienced a thrill of recognition and a sense of how Eternal is this notion of "Real Presence," and even of "bread before time" in relation to the Logos. In discussing the manna from heaven you do a good job of responding to modern conjecture about this heavenly food "occurring in nature" but you also bring up ancient rabbinical writing suggesting the manna has always existed, since before Eden. Can you briefly explain what that means, in light of John 1 and John 6?

Yes. Among the Jewish rabbis, there was an ancient tradition that the manna was not only given to Israel during the time of the exodus; it was also reserved for the righteous in heaven since the beginning of creation. The reason this is important is that Jesus uses this Jewish belief about the eternal manna to set the stage for revealing the fact that he himself has existed since the beginning, that he has "come down from heaven" (Jn. 6:38). In other words, he is no ordinary man, but the divine, preexistent Son of God. As he says elsewhere: "Before Abraham was, I AM" (Jn. 8:58).