Deep Magic: The "Physics" of Sacrifice 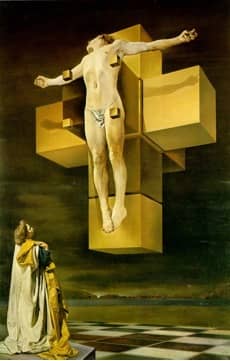 An atheist blogger surprised me recently by quoting Hebrews: "Without the shedding of blood there is no forgiveness of sins." He was quoting it because for him it epitomized everything that's wrong with Christianity: barbarism, illogic, insanity.

On the one hand, I think he misunderstood the meaning of the phrase. He seemed to think that Christians might go around forgiving people by killing sheep, or cutting themselves like the priests of Baal.

On the other hand, I think his horror was a reaction to something real, and was therefore a credit to him, since he intuitively saw something that we Christians sometimes miss: that love always costs. For the thoroughgoing atheist, the problem of suffering might eventually be solved by means of technology and an ingenious rearrangement of political systems.

But the Christian knows that it takes blood.

I wrote a few months ago on my favorite things about being a Catholic. One of them was that we can offer up our sufferings for the good of others. This seems to me not so much an addendum to the spiritual life as the very heart of it. The fact that voluntary suffering is spiritually efficacious is no less than a spiritual law, in almost exactly the same sense that gravity is a physical law.

That is to say, it's not a rule in the same sense that soccer has rules. It's descriptive rather than prescriptive. It is the way the world works. If we are surprised that the spiritual world should have rules, it is because we have forgotten that the spiritual world is no less real, no less objective, than the physical world. More so, if anything.

Seeing things in this light has helped me gain a better understanding of the Redemption. If the Crucifixion was some sort of horrible deal that Jesus cut with God the Father—I'll let you subject me to agony and death, if you let them off the hook—then God the Father doesn't sound like anybody I'd want to spend eternity with.

If, on the other hand, sacrifice is a structure that is built into the universe, then Jesus' decision to be crucified looks a bit more like Frodo's decision to carry the ring into Mordor: it's going to be horrible, but what else is there to be done—and who else is there for the job?

I don't mean to say that Jesus was forced into the Crucifixion; love can always turn necessity into choice. And I certainly don't know whether it was the only way he could have done it—who can know that? If I seem to be implying that God, in submitting to the law of sacrifice, was submitting to something outside of Himself, well, maybe I am implying that. If God is bound by the law of sacrifice, He is bound by it in the same sense that He is bound by His decision to give us free will, the same sense in which what a priest holds bound on earth will be held bound in Heaven, and in the same sense that Aslan was bound by the Deep Magic.

What I do mean to say, at least, is that our sacrifices, both the ones we consciously undertake, and the ones forced on us, are efficacious, and that voluntary submission to suffering gives us great power over the forces of darkness. Not a bad thing to keep in mind this time of year.