Currently in the Patheos Book Club, we're discussing the new book, Engaging Voices: Tales of Morality and Meaning in an Age of Global Warming.  Read the following excerpt from the book's Introduction below, and then join us for our blog conversation at the Book Club. 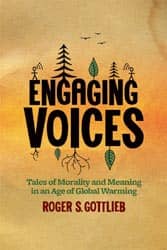 Some years ago I met a man who, over a single cup of ginger-mint tea, shook my deepest assumptions about the process of moral conversation. His name was Samuel Prana.

I had been giving lectures—at universities, churches, and civic groups—about religion and the environmental crisis. I'd begin by describing some ecological problems: not just in abstract terms that people could shrug off, but in ways that would make it real. For example, I would talk about "body burden"—the hundreds of toxic chemicals you can find in the blood of newborn babies; or the Great Pacific Garbage Patch, which is a kind of thick stew of plastic waste that ocean currents have drawn together—it's now bigger than the United States. What do such things mean, I would ask, for a life of faith and morality? Then I would show how religious thinkers, leaders, and lay people were all changing their traditions, coming into a new understanding of our responsibilities to the earth, and becoming environmental activists. Along the way I would look at some moral questions that affect us all, religious or not: how much consumption is justified, can a capitalist society ever be sustainable, and is the hope that we could truly respect other species—like the hope that we could live by the golden rule—just an impossible ideal. Then I would end with a plea that we face our grief and fear, not give in to despair since we couldn't really say what the future would bring, and choose to be the kind of people who honored and respected all of life, even if we didn't know whether we would be successful in ending the madness of the way we were living.

It was a pretty good talk, if I say so myself: passionate, informative, inspiring. With the odd joke to keep people listening.

It was after I did one of these at a local university—something to do with Earth Day, I think—that Samuel came up and introduced himself.

He was a tall man, very thin, in a clean but much-worn black suit, white shirt, and gray tie. He had the largest eyes I had ever seen—a blue so dark they were nearly black, rarely blinking, and fixed on my face with a concentration that was almost frightening. His face had enormously deep lines, around his eyes and mouth, across his forehead. Whatever else was true about him, he hadn't had an easy life.

He talked so low I had to strain to hear him. And I thought he had a foreign accent, perhaps from somewhere in Eastern Europe, but it was hard to tell. Something about him was odd. He didn't have the "let's talk about this like colleagues" attitude of a professor, and with his gray hair and wrinkles he certainly wasn't a student. Somehow I knew he wasn't a typical ordinary-citizen-interested-in-the-topic either. There was none of the "Please enlighten me" look that I sometimes get after a talk, nor the one that says "I've got a bee in my bonnet about" (global warming, why religion should be abolished, my daughter who teaches recycling in elementary school...) "and I'm going to tell you all about it."

Maybe it was the way he looked at me that made me pay close attention, rather than going into my usual "the brilliant but very approachable professor will now answer all your questions" routine.

The look in Samuel's eyes was one of—well, it's not easy to say, exactly. Perhaps generosity is the word. He was here, those intensely focused eyes said, to help me. To help me see something I'd missed and learn something I needed to learn. At the same time there was nothing fanatical or obsessed about him. He was totally self-confident in a relaxed way that led me to suspect that whatever he believed he had thought about very carefully, very intelligently, for a very long time.

So instead of running off back home I invited him to go out for a cup of tea, something I never do after lectures.

As I settled down with a large ginger-mint tea from the coffee house, Samuel, who had accepted without hesitation my offer to pay, sipped his Hazelnut latte. We began to talk. Or, rather, he started to talk, and I to listen.

About Roger Gottlieb
Roger S. Gottlieb (gottlieb@wpi.edu) is professor of philosophy at Worcester Polytechnic Institute. His newest book is Spirituality: What It Is and Why It Matters.