"There's no doubt you're a bright fellow, Gottlieb," he began, using just my last name in the way Eastern Europeans often do, "but you're missing something. Maybe the most important thing. Certainly you care about what you are saying, it could be too much. But yes it is important that you care. Except ... in the end there is a big hole in what you do."

"And what's that?" I asked, with a tolerant smile. After all, I prided myself on having thought of just about everything. Not every detail, of course—there were countless facts about environmental problems, church resolutions, and international environmental agreements that I didn't know. And never would. And there were some tough ethical issues that would stay open, as well: how much consumerist consumption was reasonable and how much was, well, too much? How to choose between preserving an Old Growth forest and helping people into decent jobs. That sort of thing. But I had always prided myself on being a "big picture" kind of guy and I was pretty sure I knew what large-scale perspectives were out there. I had a handle on how various religions and different political groups understood the world in general and environmental problems in particular. I could tell you about the conservative opposition to global warming policies, the religious critique of liberalism, and the five ways economic globalization destroyed both community and ecology. I knew who was right, who was wrong, and who was inconsistent. Who avoided reality in favor of cheap spiritual clichés and who used political correctness to justify violence, who forgot the economy when thinking about God, or God when thinking about technology, or differences between owners and workers, or people in the United States and people in Bangladesh. I had my reasons, lots of them, all lined up and ready to go.

"What you are missing," declared Samuel slowly, reaching out with a long, bony finger to tap at my arm, "is that it really does not make so much difference who is right."

"What?" I demanded, incredulous, pulling back from him. Maybe this gentleman wasn't so smart after all.

"No," he answered, "what is really important is not being right, it is how we can live together even if some of us are right and some are wrong, and others are half right and half wrong, and the rest have not made up their minds. How will we do that?"

By the bewildered expression on my face he probably realized I hadn't a clue what he was talking about.

"Look here," I replied (being a bit confused I got a bit more pretentious, and I figured I'd take the easy examples first). "Wasn't it "right" that democracy should replace inherited political power? That the slaves should have been freed? That women got the vote and the right not to be abused by men? When people take moral stands, as opposed to just acting out of habit, or because they think something feels nice, aren't they saying at the same time "This is right, this is the way things should be"?

"All well and good," he replied, clearly unimpressed. "And also painfully obvious. This is what philosophers have always done. Looked for the right answer. It started with Socrates, who did so well in Plato's dialogues that the people he argued with always seem not to know what is going on. Most of the time all they can say is, "I see, Socrates." And Plato set the stage for what followed. Thinker after thinker telling us that he—unlike all the ones who had preceded him, of course—had the real truth. He would give us the only rational way to think, the only sure morality, the ultimate meaning of human existence. And so on. And for our religious people it was even worse. The biblical God tells the Jews—"Do it this way, no argument!" And so we also will be like God: we will tell you what is right and wrong, what is the blessing and what is the curse.

"So everyone does this: the preachers, political activists, and talk show hosts; every newspaper editorial and presidential press conference. My position over yours, my values to dominate society, my view of God and heaven and ethics."

His voice had risen a bit, and he paused to cough, and then take a breath. "So," I asked gently, "What's wrong with that?"

"What is wrong is that it does not answer the question I just asked you: How are we to live together, talk together, when we do not agree? How can we speak to one another in a way that realizes there will always be differences and recognizes and learns from our differences? How do we do that, if the main thing on our minds is always: "I am right, you are wrong"?"

I stroked my beard and pressed my lips together. The professor being thoughtful. "But Samuel," I answered, shifting unconsciously into my calm-teacherly tone, since I thought this was just a common undergraduate error that needed an expert corrective, "don't you realize that certain differences simply can't be accepted? For me it is fine for people to worship in different buildings using different prayer books. But if someone wants to force everyone else to worship in his building using his prayer book, how are we to accept that difference? If the religious conservative refuses to have his daughter educated, and we have a law saying all children must be educated equally, what can we do? 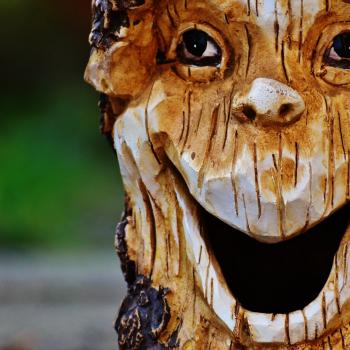 Four Phrases Your Wife Would Love To Hear From You
Shaunti Feldhahn
Get Patheos Newsletters
Get the latest from Patheos by signing up for our newsletters. Try our 3 most popular, or select from our huge collection of unique and thought-provoking newsletters.
From time to time you will also receive Special Offers from our partners that help us make this content free for you. You can opt out of these offers at any time.
see our full list of newsletters
Editor's picks See all columnists