"We can disagree on where the universe came from: created by a God, product of a Big Bang, woven out of the entrails of a spider. You have your myths and I'll have mine. But what if someone has a myth that says some group—say, the Jews—are responsible for all the problems his country faces, that Jews are immoral monsters with the ethical status of germs, and must all be killed. How am I to coexist with the man who wants to kill me? You see, the lion and the lamb can accept each other's differences, but if they lay down together only one of them is going to get up afterwards, and it won't be the lamb."

I paused, pleased with my clever turn of phrase about lions and lambs, and smiled encouragingly at him. It was a common mistake, after all.

"Really," replied Samuel, and he sighed heavily, "I would have expected better. This is just the standard philosophical refutation of relativism and false tolerance. And like most standards, it is true—but only as far as it goes. We have to have certain agreed-on values and laws. Certain kinds of rules make others impossible. Certain views are very lethal. Believe me," his intense eyes got even more intense, he rubbed the back of his neck as if thinking of some old pain, "I know all about the stories that would kill a person for being different, better than you do.

"But all this is beside the point. It is not what I'm talking about.

"So sometimes all we can do is fight the other side, or make laws against them." He reached over to tap me on the arm again. "But what else can we do? If we are not to go to war with them, Gottlieb, if we are not going to put them in jail—and always remember, if it is possible to put them in jail, it is possible that you, too, would end up there! If we are not to compel them, then what are we to do? How can we talk to them? What kind of people do we have to be to do that?"

He sipped some more of his coffee, got his breath back, and began again.

"Please do not talk to me about all the unreasonable, crazy, violent people. For always remember this: Wherever you draw the line, and put some people outside it—call them Nazis, fundamentalists, al-Qaida, imperialists, the ruling class, global corporations, military dictators, communists, radicals, tree-huggers, meat-eaters—wherever you draw the line there will be some people still on your side of the line.

"Tell me: how will you talk to them when you disagree? The more frightened you get that the people on your side maybe are really on the other side, the more you will want to prove them wrong. All of a sudden these people also will be people who must be controlled, overcome, shut out, coerced. You will draw your line closer and closer until it is just you and seven other people who think exactly like you.

"So no matter how much you tell me that ‘Some people can't be talked to, it's foolish to try, you just have to defeat them,' the problems I'm talking about will return again and again. What will you have if you don't learn something else? Endless war—with guns, with words, with what is in your heart—is that the way you want to live?

"And the other thing you have forgotten is this: unless we learn how to talk to people we think are wrong, we cannot be right ourselves. After all, we learn morality as we learn science—from other people who teach us ways to think about what we think, to question our beliefs, to test our conclusions. That is what all this moral reasoning is, no? We feel strongly about something—homosexual marriage, war in Iraq, global warming, free enterprise—and then we try to evaluate what we feel: Are we consistent? Have we looked at the facts? Are we forgetting the consequences on other people of what we think is such a great plan? Are we demanding too much of people... or too little? Are we privileging the way we do things in our little corner of the world, or our time, and forgetting that it could be different somewhere else—or that it was not always like this?

"If we do not hear such questions, put to us by people who are very different from ourselves, how are we to be as sure that actually we are right-and not just continuing some mistaken prejudice? Those stories you love to tell about political progress: how wonderful it was to end slavery or give women the vote. Every time you tell that story you are saying—"Those people on the wrong side did not think, did not listen, and ended up living lives of cruelty, selfishness, oppression."

"How can you know you are not doing it yourself, right now, if you do not listen? Did not every one of those oppressors fail to listen? Could you be doing the same thing?

"Look at it this way, Gottlieb: of course we can end up with new laws, with violent revolutions, with assassinations even. We can mock the politically incorrect, or the foolishly liberal, or the narrow religious or the orthodox seculars. We can end up there, certainly. 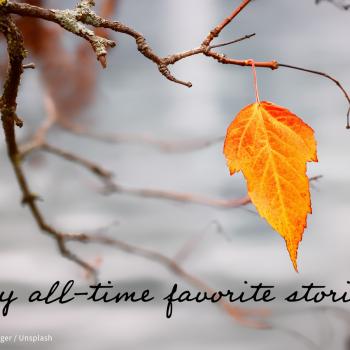 Growing Old and the Gun Lap
G. Shane Morris
Get Patheos Newsletters
Get the latest from Patheos by signing up for our newsletters. Try our 3 most popular, or select from our huge collection of unique and thought-provoking newsletters.
From time to time you will also receive Special Offers from our partners that help us make this content free for you. You can opt out of these offers at any time.
see our full list of newsletters
Editor's picks See all columnists