Luke: The Gospel of Amazement: A Book Excerpt

This month in the Patheos Book Club, we're discussing Michael Card's new book, Luke: The Gospel of Amazement. Read the Preface below, and join the conversation. 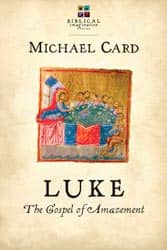 When we hear these words of Jesus, something inside us shudders. We wince at the thought of someone—anyone—who has the ability to see and hear and yet stubbornly refuses to perceive and understand. Our greatest fear is that inwardly we might be just that person.

He had just told the parable of the sower. And we will learn in Luke that a parable demands the use of the imagination. If we are to take our place alongside the disciples as ones to whom these "secrets of knowledge" have been entrusted, then we too must learn what it means to read, to perceive, to understand the Bible with our imaginations.

It is impossible, when a seed is planted in you, to know just what sort of fruit it will eventually produce. Almost thirty years ago, when Dr. William Lane smiled at me over his crooked glasses and said, "I am going to teach you how I read Scripture," how could I have known that I would spend the rest of my life in pursuit of his stated goal: reading the Scriptures with my imagination.

"We must learn to read the Bible at the level of the informed imagination": this was how he encapsulated his approach to studying God's Word. In the years that followed, he never once explained how we were supposed to do this. Instead, he simply did it. That is, Bill incarnated for his students a deep interaction with the biblical text by means of his remarkably informed imagination. A Ph.D. from Harvard, he spoke fourteen languages. You saw his imagination when he simply opened the Bible; it seemed to tremble in his hands. You heard it when he read with his booming voice, usually from the New Testament. You saw it in your mind's eye when he used primary source backgrounds to paint the image of Jesus the rabbi. Sometimes you even smelled it when Bill recounted a scene like the anointing of Jesus' feet. "'The smell of the perfume filled the house' [Jn. 12:3]: now, why do you think John included that detail?" he would ask, his voice modulating for effect.

In our own way, those of us who studied with Bill in the religion department of Western Kentucky University adapted and adopted this luminous approach. We absorbed the primary sources for ourselves: Suetonius, Eusebius, Tacitus, Josephus and the rest. We learned to ask the same sort of questions he might ask of the text: "Why is this detail there?" "What does it mean?" "How would the first hearers of this document have understood this?" "Why did the writer leave that out?" In time, on our own, we would learn to ask even better questions . . . questions of our own.

Precisely because he neglected to present this method as a full-blown system, we were left to struggle on our own. His refusal to provide a systematic, didactic outline had a powerful purpose: we were left to engage with Scripture at the level of our imaginations, by ourselves.

And now, all these years later, I would like to show you how I read Scripture, to show you what I've come to understand about engaging with the Scriptures at the level of the informed imagination. I do not intend to present a system or an outline of my own, even if I could. In this new series of explorations of the Gospels, I would simply like to share some of the discoveries I've made along the way.

Disintegration/Reintegration and the Holy Spirit
We are a disintegrated people. The signs of it are all around us. Every bird that flees when you're taking a walk is a reminder that the integrated place we once had with creation has been violated. We experience this when we witness the disintegration of every human relationship while our souls tell us that wife belongs with husband, friend with friend, child with parent. Yet at every turn we find it almost impossible to fit the fragmented pieces of the puzzles of our lives together.

This disintegration affects the way we come to the Scriptures as well. Some of us embrace the Bible with our hearts, which is right to do, and yet we do not bring disciplined minds into the process. Sometimes the reverse is true: we apply first-rate minds to the Bible and yet fail to be sensitive to what the Word is whispering to our hearts. In the end, it is not a heart problem, nor is it a head problem. It is an integration problem. We must ask the Lord to help us bring our whole self to the task of listening to the Bible. How can we begin to reconnect what became disconnected at the Fall? How can the heart and mind become reintegrated?