The sixth chapter of John is composed of three sections: first, the miracle of Jesus' feeding the 5,000 (6:1-21); second, Jesus' sermon on the Bread of Life in the synagogue in Capernaum (6:22-51); third, his listeners' reaction to the Bread of Life sermons (6:52-71). I will devote a separate column to each of these sections.

Feeding the Five Thousand (Jn. 6:1-21)
To understand the first section of John 6 we need to notice the broader context of the events. The first thing to note is that this is one of the relatively few chapters where all four Gospels record the same story. Paralleling John 6:1-15, the feeding of the 5,000 is also described in Matthew 14:13-21, Mark 6:32-44, and Luke 9:10-17. Furthermore, and rather uncharacteristically, some of the parallel incidental details are quite exact: 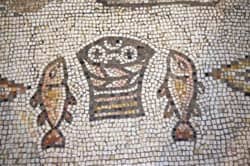 From the perspective of textual and literary analysis of the Gospels, this passage is very interesting since it provides such detailed parallels among the four Gospels. As I have discussed earlier, the precise nature of the relationship and possible interdependence of the four Gospels is debated among scholars, with parallels like these understood as evidence of historicity, of shared oral tradition, of literary dependence of some sort, or of outright fabrication.

At its most basic level this story makes two points. First, Jesus has the miraculous power to provide food, a power attributed to God as Lord of rain and fertility in the Hebrew Bible. Second, this story highlights Jesus' compassion on the multitude by providing for their daily needs. In the Lord's Prayer (not found in John), Jesus teaches the disciples to pray to the Father to "give us our daily bread" (Mt. 6:11; Lk. 11:3). Here, Jesus, as God incarnate, miraculously provides precisely this requested daily bread.

The Passover (6:4)
John, however, adds two important details that shift the emphasis of this story in his Gospel. First, John notes that "the Passover, the feast of the Jews, was at hand" (6:4), a detail not mentioned in any of the Synoptic Gospels. Now this is possibly simply a random detail, but given the fact that John pays careful attention to Jewish feasts, it is likely that John intends to make a point. If so, what is it?

To answer this question we need to briefly look at the Passover Feast as celebrated in the first century. It is important to note that many of the traditions associated with the modern Jewish Passover Seder developed after the time of Jesus, while other earlier traditions have been largely forgotten or abandoned by modern Jews. The practice and meaning of Passover has thus changed through time. Here I will briefly examine only the basic meaning and practice of Passover at the time of Jesus. There were a number of key components in the first-century Passover (Ex. 12-13; Lev. 23:4-8; Dt. 16:1-8; 2 Chr. 30; 2 Chr. 35:1-19; Jubilees 49; Mishnah Pesaḥim):