Chapter five of the Gospel of John takes place on a Sabbath during an unnamed festival in Jerusalem. As I've noted before, the structure of John emphasizes events during a series of temple festivals, and subsequent discussions that are often thematically linked with those festivals, but in this case there is no clear connection. Theologically, the theme of the chapter is Jesus doing the work of the Father, and prophetic and scriptural witnesses for Jesus.

The Pool of Bethesda was near the Sheep's Gate (Jn. 5:2). Archaeological exploration has identified the location of this event north of the Temple Mount. The Sheep's Gate was probably about where the current Lion's Gate (Stephen's Gate) is located. It was so called because it was near the sheep market, and was the gate through which sheep were brought into the city on the way to the Temple Mount for sacrifice. In Aramaic the name Bethesda means "House of Mercy" (bêt ḥesdā'), probably referring to it as a place where pilgrims received food and water, or to the healing qualities attributed to the pool, manifesting the mercy of God.

In ancient and modern Near Eastern societies, beggars and the infirm tended to congregate near holy places hoping to receive alms from the many pilgrims. But this particular pool was also thought to be a healing pool, where the sick would come to immerse themselves when the water rippled, hoping to be healed (5:7). Traditional translations (such as the King James Version) include verse four, where the waters were said to have been stirred by an angel. This verse is frequently removed from modern translations because it is missing in most of the earliest and best Greek manuscripts.

Today the remains of the pool are near the Church of St. Anne, and the layout of the "five roofed colonnades" (5:2) can be clearly seen. This is an interesting example of an incidental detail in John that could only have been known by someone who had actually been to Jerusalem, which was destroyed by the Romans in 70 C.E.

The colonnades and surroundings were crowded with invalids begging alms from the pilgrims (5:13) and hoping to be the first into the pool when the waters stirred. Jesus healed one of the cripples by simply telling him to get up and carry his bed, which was probably a reed mat and blanket (5:8). 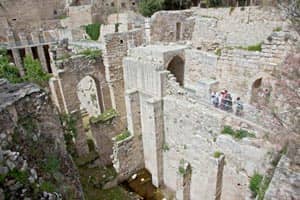 Photo: The modern archeological remains of the Pools of Bethesda. The original pools were where the water is puddled in the lower center of the photo. The ruins are mainly from Byzantine and Crusader era churches built on the site. (courtesy of William Hamblin)

At one level this is simply a story of Jesus' manifesting his mercy and divine power by healing a man. For John, however, this is simply background to the real point: the healing occurred on the Sabbath, and Jesus told the man to carry his bed. The problem arose when "the Jews" (5:10) saw the man carrying his bed, and objected that it violated the Sabbath laws against work: "It is the Sabbath, and it is not lawful for you to take up your bed" (5:10).

Of course, carrying your bed on the Sabbath is nowhere explicitly forbidden in the Torah/Law.

So what is the basis of their objection? During the time of Jesus there were many different interpretations of the Torah, and contemporary Jews were engaged in an ongoing and sometimes quite virulent debate about the meaning of Torah. One group of Jews, which included the Pharisees and which would eventually develop into Rabbinic Judaism, maintained that Jews should "make a fence around the Torah/Law" (Mishnah, Abot 1.1; Pirke Abot 1.1). Their view was that they should make a hedge of additional laws that prevented people from even coming close to breaking a commandment in the Torah. This group of Rabbinic Jews spent the next few centuries doing precisely that, and recollections of their deliberations can be found in the Mishnah (c. 200 C.E.) and the Talmud (c. 500 C.E.). Fundamentally, this school of thought held that if the Torah forbids X, Jews should not even come close to doing X, and therefore they should forbid X+. Hence, the Torah forbids working on the Sabbath (Ex. 20:10). But what is work? The complexities of this question were examined in a section of the Mishnah called "Shabbath," and in 7.2 it expressly includes "carrying anything from one building to another" as one of the thirty-nine categories of work that are forbidden on the Sabbath. At the time of Jesus, however, all these things were in dispute, and Jews would frequently argue over whether a particular act was forbidden or permitted on the Sabbath. A number of these types of discussions are found in the Gospels (Mt. 12; Mk. 2-3; Lk. 6).