It Takes a Town to "Get Low" 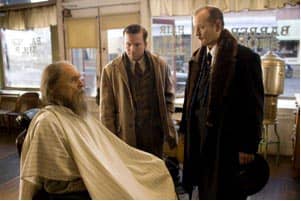 It has been said that there is no such thing as a private sin—that the relationship humans share as members of the Body of Christ makes such a distinction impossible. While the theology may be a bit fuzzy, the notion that transgressions committed in secret send ripples throughout all of humanity is borne out by experience; when one falls, all are brought low.

Get Low, a Southern fable told through the life of an idiosyncratic Tennessee recluse, reminds us that sin and redemption touch us all.

Felix Bush (Robert Duval), an intractable loner, has spent the last forty years of his life sequestered in the hills of Caleb County, Tennessee. He's made no secret of his dislike for others, and has long been viewed by the locals with a combination of mistrust and downright hatred. After decades of self-imposed exile, Bush's first foray into town ends in violence. Yet the question of why he came back at all seems of little interest to anyone but Frank Quinn, owner of the town's struggling mortuary, and his enterprising young assistant, Buddy.

Quinn's curiosity, however, is well-placed; it turns out Bush wants the finest funeral money can buy, but he wishes to attend as a guest rather than the main attraction.

Happy to have a paying customer, the two morticians set about meeting Bush's increasingly bizarre demands: He wants to invite everyone in the surrounding environs; he wants them to publicly recount any stories they may have to tell about Bush, whether good or ill. Most unexpectedly, he wants to raffle off his sizable stake at the end of the day, with the understanding that possession will take place only after he passes away.

Buddy astutely recognizes that Bush is manipulating the townsfolk, and that he is burdened with dark and devastating secrets; he redoubles his efforts to find someone who knows Bush and is willing to talk about his past. As the Hermit of Caleb County's funeral day draws near, the entire town finds itself forced to confront the demons of a single man, with unexpected and unforgettable results.

When the film was first released in the fall of 2009, much of the attention it received was for Duval's performance, and rightfully so; his Felix Bush is mesmerizing and maddening, yet sympathetic. His personal agony is palpable, and his halting steps toward redemption are both convincing and cathartic.

His journey to wholeness, though, while painful and deeply moving, is surprisingly straightforward; indeed, it is almost blunt. There are moments during the film where Bush seems like little more than a hairier, hoarier (and decidedly less complex) "Sonny" Dewey. But unlike Duvall's breathtaking work in The Apostle, this is no one-man show. Bush's arc alone, powerful though it may be, is insufficient to sustain the narrative of an entire film. The reclusive wildman's story cannot be about a private struggle, for it is only in the clash between the terrifying secrets of his past and the public actions of his declining years that the film's depth and subtlety is revealed, exposing the symbiotic role the town and the hermit have played in one another's lives.

The sins of Bush's violent youth, left unexamined for decades because they were simply too painful, had far-reaching consequences—not only in his own life, but in the lives of many: small town citizens, childhood sweethearts, and bewildered morticians alike.

The townspeople, given no reason to doubt their worst imaginings, have imaged them. But their misunderstanding of Bush's suffering and self-loathing has damaged them as assuredly as it has crippled and isolated him. In recognizing this, the film offers a hard-hitting reminder that connections between human beings penetrate into the personal and the societal fare more deeply than we often recognize, and that repentance, too, is rarely a private thing.

We humans are over-fond of our own self-sufficiency; we wish our redemptions to be as much a matter of our own personal strength as our sin was of our own personal weakness. "It's between God and me," we say, "and I'll find a way to make it right." But the catalysts for grace-filled repentance and retribution often come from the most unexpected and public of places. Sometimes, an unanticipated glance from a relative stranger is all that is needed to spark a dramatic, life-changing remorse.

Get Low's Quinn and Buddy are vital players in Bush's renewal—not because they schedule musicians and refreshments and shepherd the mundane details of his living wake, but because they lay the emotional and moral groundwork Bush needs to in order to confront his long-hidden sins. Quinn, his own life littered with missteps and regrets, truly understands Bush's yearnings for repentance. Though weighed down by cynicism and avarice, Quinn still manages to embrace his pivotal role, recognizing in the other's single-minded tenacity his own deep remorse and hopes for atonement. And Buddy, exemplary in his refusal to condemn the old man for his unknown past, fans the flames of grief and guilt into the purifying fire Bush so desperately needs. His remarkable generosity is a reminder that "judge not, lest ye be judged" is more than just a warning against the dangers of hypocrisy; it is a powerful antidote to the deadly division our unbending judgments create between us and those who most need our assistance.