The demon Slubgrip's previous adventures were gathered and recorded in Fr. Longenecker's Lent Book, The Gargoyle Code. Written in Screwtapian style, Slubgrip instructs his protege Dogwart, while trying to keep tabs on his own 'patient'-all while the tempters tumble through Lent to Easter Day.

Yes, yes. I see what you mean, Snort. A very acute observation, my lad. Here, why don't you sit in the front row? You've got some very interesting things to add to the lecture series. I like you, Snort. I can see you've got something about you and you'll go far. Remind me after class about dinner. I'd like to speak to you further about the temptation pyramid scheme a friend has told me about. I'd very much like your opinion on the matter.

Now then class, attention please. Pull yourselves up in your slime if you can. We've got the most interesting section on this propaganda chapter.

You have seen the historic examples of propaganda. In the last human century, with the advent of mass communications, we've had some notable successes. In Europe and the Far East the propaganda machines of tyrants and dictators of all sorts have been crude but effective.

Some of you will find yourselves assigned to the North American theater of conflict after you graduate from Bowelbage U. What you will find there is the most delightful, the most gratifying, the most pleasing and powerful propaganda machine yet invented by any of our great brothers below.

You have seen how images and messages have been communicated in the totalitarian regimes in order to inculcate an idealized world view, while the regime in question has gone on to maraude, rape, and pillage, destroy the poor and slaughter millions. In the developed, so-called 'Free World' the propaganda machine has been far more subtle and beautiful and effective than anywhere else in the world ever.

In Russia and China we had parades with missiles and young people in uniforms waving flags and marching soldiers and huge posters of Stalin or Lenin or Chairman Mao. In the United States we have something called 'billboards'. This is part of a whole extravagant, well-funded, incredibly polished and professional campaign on our part in order to do in the West exactly what we accomplished in the East.

The idea is to use images not only to sell products, but to sell a world view. We wish to build up in the victims' minds a false idea of themselves, a false idea of the world, a false idea of their future. So through advertising that is virtually omnipresent, we construct a world view that is thoroughly materialistic, urbane, sophisticated, and beautiful. Drape a lovely girl over the hood of a sports car and the poor chimps start drooling over it immediately. Show them a condominium overlooking a beach at sunset. Show them a scrumptious meal, beautiful clothes, or jewelry; show them an impossibly tanned and handsome man with a dreamily beautiful woman in most any setting and they will buy not just a product but a dream, and it is this dream which we are most interested in.

My dear flukes, if you are assigned to the United States, you will find that advertising is one of your key weapons. The poor apes will find all of it simply irresistible, and as they drool and spend and go into debt they will be soaking up, without ever thinking about it, the philosophy we want them to absorb.

They will become thoroughgoing, self centered, materialistic, hedonistic brutes. Furthermore, (and this is so delightful it makes me giggle for joy) as they do so, they will assure themselves that they are simply being 'good Americans'.

This is because they have equated unparalleled wealth with 'the American Dream' of "life, liberty, and the pursuit of happiness." They would never imagine that their 'consumerism' is another word for unquenchable greed, and because of their quaint isolationism, they will never even know, much less care about the millions of poor people in fields and sweatshops around the world who work for a pittance to provide them with their cheap luxuries. Not once will they give a thought for the millions of children who are starving because they, and the corrupt dictators they prop up, consume a vast proportion of the world's resources at the cheapest prices possible.

Do you see what we've managed to do? Once more we have a militaristic regime that suppresses the poor, facilitates insanely wealthy people to grab yet more wealth from those stricken with poverty, and on top of it they think themselves the happiest, nicest, healthiest, and most wonderful people who ever walked the face of the earth. Despite the fact that they spend trillions of dollars on the most advanced weaponry and military forces, 90 percent of them would never, for a moment, consider their country to be aggressive. They never give a thought to the impact their aggression and consumption has on the world. 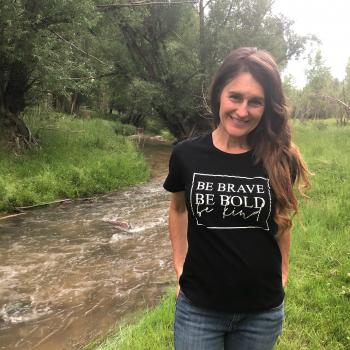 Missing Half of God
James McGrath
4

Mockumentary YouthMin is No Christian Movie, But It’s Smarter Than It Looks
Paul Asay
Get Patheos Newsletters
Get the latest from Patheos by signing up for our newsletters. Try our 3 most popular, or select from our huge collection of unique and thought-provoking newsletters.
From time to time you will also receive Special Offers from our partners that help us make this content free for you. You can opt out of these offers at any time.
see our full list of newsletters
Editor's picks See all columnists