Me, Myself, & GERTY: Wisdom is "Moon's" Harsh Mistress 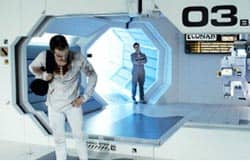 Unlike many of Hollywood's brightest lights, whose lofty positions cloud their ability to recognize the greatness of those who have come before them, Jones is a firm believer in acknowledging his creative influences, seeing himself as just another filmmaker in a long and illustrious tradition.

A commercial director previously most famous for his genetics (how many filmmakers can claim Ziggy Stardust as their father?), Jones' debut film, Moon, is the latest entry in the revered cinematic lineup of Hard Science Fiction, a genre that prides itself on scientific accuracy and the preservation of known scientific laws rather than on the spectacle and bombast so prevalent in most sci-fi offerings. Ironically, many of the genre's most well-known works—Solyaris, Blade Runner, Outland, Gattaca, and the genre's true godfather, 2001: A Space Odyssey—are far more concerned with the individuals that populate their bizarre landscapes than with the science behind them.

Clearly influenced by its more famous predecessors, Moon is no exception to that trend: a psychologically complex film that leans heavily on the ideas, themes, and artistry of such greats as Kubrick and Tarkovsky, it delves into the question of how we humans come to understand ourselves, and those with whom we interact, whether human, robotic, or "other."

Sam Bell (Sam Rockwell), a Helium-3 extraction technician for Lunar Industries, is nearing the end of his three-year stint at Sarang Moon Base—a mining facility that provides power to over 70% of the Earth's population. Banished to the far side of the moon, where communications must be carried out through satellite relay rather than live feed, Sam is starved for human contact. His lone companion during his arduous stay is a robot named GERTY, whose soft-spoken demeanor is just emotionless enough to be disconcerting. Now, days from his return Earthside, Sam begins to suspect that he is not alone.

A sudden and debilitating medical condition feeds Sam's growing insecurity; his distracted efforts to carry on with his work lead to a catastrophic, near-fatal accident on the lunar surface. In the accident's aftermath, Sam discovers something Earth-shattering: he is not the only Sam Bell on the moon.

Pressing GERTY for details, Sam learns that Lunar Industries, in a bid to achieve maximum efficiency and profitability, has implemented a program whereby each deteriorating technician is replaced by a cloned version of himself. This cloned version bears all the abilities and memories of the Original Sam, but conveniently absolves the energy company from the moral repercussions of abandoning a human being on the moon.

Normally, the clones are prevented from overlapping by a long and complicated series of protocols, but GERTY's sincere concern for Sam's well-being prevented him from abandoning his master to the harsh lunar night. Sam, recognizing in his symptoms the first stages of clone disintegration, must now confront the questions of his own derivative humanity and mortality—questions made painfully obvious by his younger, healthier version which confronts him at every turn.

Jones' admiration and gratitude for the films of his youth are present in every frame of Sam's story, from GERTY's obvious provenance in 2001's HAL to Sam's Blade Runner-tinged struggles with his counterfeit humanity; from the Outland-ish stylings of Saran Base to the disquieting, Solyaris-like presence of the Moon itself. Yet despite bearing the unmistakable hallmarks of his predecessors, Jones grapples with his themes in a more direct and accessible way than many of the hard sci-fi stories of the 70's and 80's, adding unexpected and insightful ideas to those that came before.

The perceptiveness and emotional core of Jones' film is built on his examination of the question and problem of cloning, though his use of that particular sci-fi trope takes a very different tack than one might expect. While studiously avoiding the question of its morality altogether, his focus on the clones' parallel existences offers his audiences an easy way to compare disparate versions of Sam Bell simultaneously.

This, in turn, allows Jones to focus on the importance of self-understanding. The older Sam Bell's interactions with his clone—interactions with himself, through the wonders of science fiction—are both enlightening and instructive. Recognizing the anger and pent-up frustration personified in his younger self as his own frustration and anger, he also recognizes it as the very flaw which led to the destruction of Original Sam's marriage so many years before: "I see it now; I see what Tess was talking about," he says sorrowfully, recounting the way in which his hair-trigger temper and unchecked sullenness pushed away the loving wife they both remember so clearly.