Editor's Note: This is one in a series of Lenten reflections on the men and women who became the "shouting stones" for Jesus on his way to the Cross. How do the actions of these everyday folk invite us in our Lenten journeys? In this reflection, pastor and spiritual director Carl Gregg considers a servant girl who questioned Peter about his relationship to Jesus. 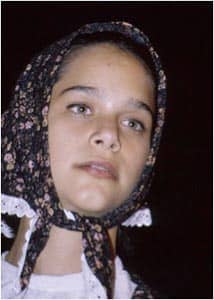 The Servant Girl with a Question
Mark 14:66-72
My name has been lost to history, but some of my story was passed down around campfires and dinner tables—and even in sermons delivered in worship services. The fact that my name has been forgotten, even through a brief part of my story is still remembered, does not surprise me, because throughout my life people knew me much more by my role of servant than by my name. After all, I was a female in a male-dominated world. I was young at a time when age often garnered respect. And I was a member of the slave class in a world where servants were at the bottom of the social ladder.

During the brief moment of my life that people still talk about, I was a servant girl in the court of the Jewish high priest Caiaphas. I had been selected for this role fifteen years earlier, the same year that a Roman official first appointed Caiaphas to high office. And I was on duty that fateful night when I saw Peter below in the courtyard of the Temple. I had only seen him once before, a few days earlier. He had been standing beside a rabbi, who was teaching to a large crowd. I asked a woman on the outskirts of the crowd, "Who is that?" She said, "The rabbi's name is Jesus and the man seated behind him is Peter"—except that she didn't say "Peter," even though that is the name under which he is most well known to history. Instead, she called him by his lesser-known Greek name, "Cephas." And that name stuck in my head because the name "Cephas" means "rock," and is from the same Aramaic root as my boss' name "Caiaphas," which also means "rock."

On the night in question, I had just brought some food to Caiaphas as he was preparing to interrogate the rabbi named Jesus whom I had seen teaching the previous week. He pushed the tray away and dismissed me rudely with an abrupt wave of his hand. As I was walking out of the room, I heard him ask the rabbi, "Have you no answer? What is it that they testify against you?" At first the rabbi was silent and did not answer. As I opened the door at the servant's entrance to slip away, I heard the high priest ask him again, "Are you the Messiah, the Son of the Blessed One?" As the door shut behind me, I heard the first two words of the rabbi's brave response: a firm, in-your-face "I am...."

On my way back to the kitchen, I looked down into the courtyard and was shocked to see Peter there. I did a double take, and thought: "That's the guy! That's the guy with the same name as my boss who was with the rabbi that my boss is in the middle of questioning!" I ran downstairs and found him warming himself by a fire in courtyard. I stared closely at his face and said, "You also were with Jesus, the man from Nazareth." His face changed into a perplexed look. Unlike Jesus' bold, affirmative answer, "I am," Peter muttered, "I do not know or understand what you are talking about." He then promptly turned his back to me and shuffled toward the forecourt of the Temple. Just at that moment a cock crowed.

I could sense that he was lying, and I knew that I was right about who he was. I could feel anger boiling up inside me, and I said under my breath, "This man has more in common with my boss than just a similar name. All these men think they can arrogantly dismiss me as if I didn't matter." I had never confronted Caiaphas about how he never thanked me or acknowledged my hard work because I couldn't afford to lose my job. But I didn't have to let this man treat me like I didn't matter. So I followed him and said loudly, so that a number of bystanders could hear, "This man is one of them. He's one of the followers of Rabbi Jesus that was arrested earlier." This time, Peter spat out a vehement denial, and stormed away from the crowd. But the bystanders had begun to whisper amongst themselves that—now that their attention had been drawn to this stranger—he did look like the man some of them had seen with the rabbi.

After a few moments, one member of the crowd spoke up, "Certainly you are one of them, for you are a Galilean!" This time, Peter began to curse and loudly swore on oath: "I do not know this man you are talking about!" At that moment the cock crowed for the second time. Peter looked bewilderingly in the direction of the sound. I learned later that he was reminded at that instant of the rabbi's prediction that "Before the cock crows twice, you will deny me three times." That night I only knew that Peter broke down and wept in front of us all.