Who Are the Poor?: Tim Keller Talks Justice

It was beginning to seem that the phrase "social justice," at least in evangelical circles, was becoming a four-letter word. Just over a year ago, Glenn Beck—evangelicalism's favorite Mormon—started a campaign against the word when, on his radio show, he brazenly announced that Christians who found the phrase on their churches' websites should flee their churches. It was a code word, he announced, a sort of shibboleth that showed the church was really a clandestine center of leftist political agitation.

Although it's difficult to decipher what he was thinking when he made this claim—and defended it for weeks—I imagine he had in mind the kind of small, mainline churches that feature Jim Wallis book clubs. Wallis, in fact, became his foil in the fallout. But one church I feel confident that Beck did not have in mind when he made his pronouncement is Redeemer Presbyterian, one of New York City's largest churches.

The word "justice" is all over Redeemer's website, including in an advertisement for this past Monday night's conversation about justice featuring Redeemer's pastor and best-selling author Dr. Tim Keller and MSNBC's Martin Bashir.

I had the opportunity to attend the event at the New York Society for Ethical Culture, and as the evening's activities commenced it was announced that Bashir was sick and would not be in attendance. His replacement, we were told, would be Fox News religion correspondent Lauren Green.

There was an audible sigh of disappointment at the news that Bashir, whose aggressive interview with Rob Bell had earned him some serious evangelical street cred, would not be asking the hard questions of Keller. Green acknowledged the slight awkwardness of a Fox News correspondent, as opposed to one from MSNBC, talking about social justice. She joked that her affiliation would make her an excellent devil's advocate in the conversation.

Green began the conversation by asking Dr. Keller if there was one universal biblical principal that all Christians could agree upon when it comes to the call to justice. Keller pointed to humanity's common nature as created in the image of God. He referred briefly to Yale philosopher of religion Nicholas Wolterstorff's assertion that being made in the image of God grants everyone the right to not be exploited or enslaved.

When Green asked how Christians should talk about justice with people who don't share our faith, Keller appealed to the Catholic principle of Natural Law, with which he said he agreed. This might have been controversial, given the recent, heated discussion on this topic that is taking place at Christianity Today, except that Keller issued his agreement so matter-of-factly and with so much confidence, as is his way.

It is precisely Dr. Keller's easy, matter-of-fact way, not to mention his often-brilliant insights into scripture, which make his following in New York and beyond so loyal—a large crowd of people were turned away from the event after the building reached capacity.

Throughout the course of the conversation on justice, Keller managed to answer each of Green's questions—some of which were phrased in such a way that her rightward leaning was on display—with eloquence and tact, proving what is often thought impossible, that a pastor can speak about the biblical call to justice in a mostly apolitical way.

Keller acknowledged several times that the differing approaches of conservatives and liberals to the topic of justice can both be right in certain respects. He noted that conservatives are right to point to the family as a crucial factor in fighting poverty. On the other hand, he said, liberals are right to talk about the issue in terms of systemic disadvantages.

Perhaps the best exchange of the evening came when Lauren Green asked, "Who are the poor?" The poor in the United States, she noted, seem much better off when compared to poor people in developing countries. She added that compared to Donald Trump, even she could be considered poor. To me, listening to this question made me feel the way onlookers must have felt when Jesus was asked, "Who is my neighbor?"

Keller's first response, which came quickly, referred to the government's designation that a family of four living on less than $23,000 is the marker for poverty. But he jumped from that formulaic answer to profundity. "In the Bible," he said, "poverty is seen in terms of power."

This claim reorients the conversation, again, as Jesus' response to the neighbor question did. If poverty is seen in terms of power, than those with less power are more often excluded and thus in need of justice. The Bible, Keller continued, doesn't offer a bright line that marks the beginning of poverty. Rather, we should think of poverty and power in terms of a scale, and our job, he said, is not to look up the scale with envy, but down the scale with grace.

Assessing the False Claims of a COVID Denialist
Cassidy McGillicuddy
3

The Colors of Autumn
Mary Pezzulo
4 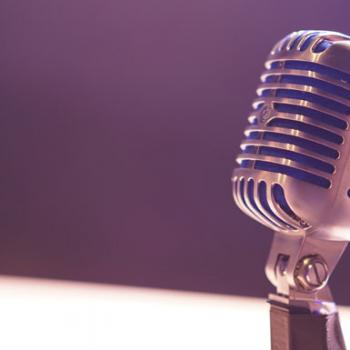 If God Is Good, Why Is There Evil and Suffering?
Randy Alcorn