Witness and Willingness: The Roman Collar 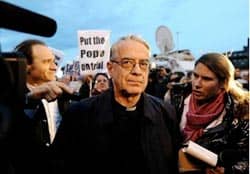 A friend of mine who is studying for the Permanent Diaconate related to me that he'd been wondering why so few priests seem to wear their collars, anymore. He got his answer when one of his teachers, a priest who does wear his collar, reported that during the day he'd been spat upon and threatened with physical violence as he walked down the street.

I have a cousin who is a priest, a Capuchin, who rarely wears his robes outside the church because it's become such a hassle to deal with the foul remarks, "trolling for a teenager, Father?"

Clearly, some of the abuse that good priests have to put up with these days is directly connected to the terrible and scandalous crimes of pederasty that were perpetrated for too long upon too many, with seeming impunity—a steaming and infected boil on the church that is finally being lanced. The scandal has been a tragedy for the victims, and a tragedy for the faith, and it is also a tragedy for the countless good priests, who have remained faithful to Christ and to the Gospel, and who have honored their vows, but are carrying a cross of scandal for the sins of others.

My friend, considering the priests who, tired of the hassles, have stopped wearing their cassocks, their collars, or their robes, wrote: "Isn't it worth it to take some abuse for Christ? Last Ash Wednesday, the push-cart guy on our street, who is Muslim, saw my ashes and looked at me like I was a lunatic. Isn't Christ worth taking some of that? Shouldn't we all be willing to carry that small cross?"

But ashes once a year, and the odd looks and nasty comments that wearing them can provoke (remember when Ted Turner mocked the Catholics on his staff who wore ashes?) are not the same as having to take daily—sometimes hourly—abuse for wearing a collar.

When Buddhist monks and nuns go out in public wearing their robes, they usually get some curious looks, but they're not harangued for their vows of celibacy, and many folks (myself included) like seeing them and taking note of the fact that there are people who give up a great deal that is good and valuable and tender, in order to follow a Path. It's not the path I choose, but I do like to see it.

Just so, when I see a priest in collar, or a seminarian in cassock, or a nun in her habit, I like it. It comforts me to know that they are out there—the people who are living Consecrated lives, the "necessary others" giving up so much that is good and valuable and tender, in order to Serve. There is something powerful in the silent Witness their attire proclaims. I have read interviews with young sisters who have reclaimed the wearing of the habit and have had wonderful encounters with people who are either pleased to see that Witness, or who ask them questions the nuns are happy to answer, as it clears up a lot of misinformation, or gives them a chance to talk about Jesus. They get some nonsense once in a while, too, but not so much, it seems as the priests do.

Still, I take my friend's point, and I wonder if the unwillingness of our priests to endure the daily "martyrdom of mockery" (and threats of violence) doesn't harm all of us, in a way. We lose that silent witness, and the re-assurance that someone is out there, living that life. If they, because of the despicable actions of the few (and the poor responses of some bishops), are suffering a sort of martyrdom, then the rest of us are, too.

Our suffering is shared. They suffer with the collar, we suffer for them not wearing it and not suffering for it. We suffer from the loss of an example of consecrated commitment, and of a willingness to suffer for it.

I don't mean this to sound hard on our priests. They don't have an easy time of it, right now, and I know so many who are sick at heart over the revelations of the last few years—but perhaps, in the midst of so much upheaval, as this boil is being lanced and the infection is being treated, we Catholics really, really need to see these faithful priests, to remind us that they're out there, and that they are stout-hearted.

It takes generosity of spirit, in these days, with so much bad publicity—with horrid examples of bad priests on the front pages—for people with suspicious minds or angry hearts to pray for our priests. But Lent is a fine time to remember that the majority of priests out there are good men carrying a very heavy burden, and that they need encouragement. Prayer will help.

It's always good to remember that in the end Grace and Courage and Fortitude are gifts, and that they are not bestowed upon us because we are "worthy"—none are worthy. They are bestowed upon the willing.