After the miracle of the feeding of the five thousand (Jn. 6:1-21), many of the people who had received the bread followed Jesus to Capernaum (6:24). There, in the town's synagogue (6:59), Jesus encountered the people, some of whom had wanted to make Jesus king on the previous day (6:15).

Overall, the discussion in the Capernaum synagogue did not go well: "after this many of his disciples turned back and no longer walked with him" (6:66). What caused this quick transformation from wanting to acclaim Jesus king to rejecting him entirely? In essence this was a problem of unfulfilled expectations: because of Jesus' failure to fulfill their expectations, they rejected that which Jesus offered, which paradoxically was actually far better than what they had originally wanted.

Moses and the Bread from Heaven (6:25-34)
The discussion in the synagogue of Capernaum began with contention. Jesus accused the crowd of having come to him for free bread (6:26), while ignoring the food of eternal life that he offers (6:27). In other words, they saw Jesus in purely material terms, as the expected messianic king (6:15) who would free them from Rome and provide for their physical needs. The rift arose because Jesus does not fulfill this expected messianic role. 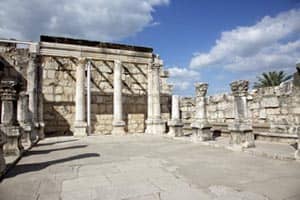 Photo: the synagogue of Capernaum where Jesus taught his sermon on the Bread of Life. This building dates from the 4th century, but is built on the foundations of the 1st-century synagogue. Courtesy of William Hamblin.

Specifically, Jesus said that the people "are seeking me, not because you saw signs, but because you ate your fill of the loaves" (6:26). But wasn't the miraculous multiplication of bread the sign? In fact, for John, the miracle is not the sign; the miracle only points to the sign that Jesus is the Messiah and Son of God. Even though they saw the miracle, they couldn't see its significance as a sign. They couldn't see past the physical bread to the eternal Bread of Life.

In this passage Jesus refers to himself as the "Son of Man" (6:27b), a title found frequently in John. In the Hebrew Bible, the phrase "son of man" (ben ʾādām, alternatively "son of Adam") is generally an idiomatic Hebrew expression for "human being." The prophet Ezekiel, for example, is addressed as "son of Man" ninety-three times in Ezekiel, probably simply meaning "mortal." In Daniel 7, however, the phrase "Son of Man" (Aramaic bar ʾěnāš) was used in a cosmic sense to refer to the celestial figure sent from before God to establish the everlasting messianic kingdom (Dan. 7:13-14). The title "Son of Man" was also used in this cosmic sense in other Jewish intertestamental writings (1 Enoch; 4 Ezra 11-13; 2 Baruch 36-39). By the time of Jesus, the epithet "Son of Man" was thus widely understood to be a title for the Messiah. When Jesus used the phrase "Son of Man" to refer to himself, he was claiming to be the cosmic figure prophesied by Daniel.

Jesus further stated that "God the Father has set his seal" (esfragisen) "on the Son of Man" (6:27b). What is the Father's seal, and what does it mean to receive it? In its most immediate sense it probably has reference to the Son of Man receiving the seal of everlasting "dominion, honor, and kingship" over all the world from the "Ancient of Days" in Daniel 7:14.

In its broader biblical context, the practice of marking or sealing something as one's personal possession comes from the widespread ancient Near Eastern custom of stamping and sealing clay markers with cylinder seals, stamps, or signet rings as a sign of ownership. In Israel the most notable archaeological examples are the le-melek ("[belonging] to the king") seals, but many such Israelite seal stamps (often called bullae by scholars) have been discovered. Thus, marking something with the name, sign, or seal of ownership was widely practiced in ancient Israel. God is said to have such a seal with which he "seals the stars" (Job 9:7; Sir. 17:22), probably a metaphor for celestial beings. At its most basic level, a seal was a mark or stamped impression representing ownership or authenticity (1 Kgs. 21:8; Esth. 3:12, 8:8-10; Dan. 6:17). When God seals something, it shows it belongs to him. Circumcision is described as a seal which all Israelites receive to indicate they are God's people (Rom. 4:11).

The most notable biblical example of God sealing someone as his personal representative is when the name of God (le-Yhwh) is placed as a seal (Hebrew ḥōtām, Greek sfragis) on a gold plate bound to the forehead of the High Priest (Ex. 28:36). When the Father sets his seal upon Jesus, it is probably an allusion to sealing him as the new great High Priest (see further discussion on Jn. 17). In the New Testament all Christians are likewise sealed with the name of God. The righteous receive the seal (sfragis) of God on their foreheads (Rev. 7:2-3, 9:4). This seal is said to be Christ's "name and [the] Father's name written on their foreheads" (Rev. 14:1, 22:4), precisely as the name of God was written on the gold plate on the forehead of the Jewish High Priest.