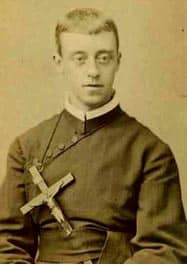 Dear brethren, you have all felt the great contrast that there is between the awful rites of Good Friday and the joy of today. Still fresh in your minds is the memory of the darkened church, the uplifted crucifix, the wailing of the reproaches. You remember, too, "the silence that might be felt" that reigned in God's temple on Holy Saturday.

You can recall how still the church seemed yesterday at early morning, just as if some awful deed had been done there the day before; you may remember how unspeakably solemn seemed the silent procession to the porch to bless the new fire; how quiet and subdued all that followed.

But suddenly a voice rang out into the darkness, the voice of the sacrificing priest at the altar; an "exceeding great cry" pierced the stillness, and instantly every veil fell; the sunlight streamed in through every window; chiming bells, pealing organ, and choral voices burst upon your senses; everything seemed to say, " He is risen! He is risen!" And we felt it was almost too much, almost more than the feeble human heart could bear and not break for very joy.

If, then, this contrast is so marked and this joy so great after a lapse of eighteen hundred years and more, oh! what must have been the joy of the first Easter day. The first crucifix bore no ivory or metal figure; it had nailed to it the flesh of the Son of God. The first Good Friday was no commemoration of an event; it was the event itself. Oh! then how great, how great beyond mind to imagine or tongue to tell, must have been the joy of the first Easter. Jesus had died, left all his beloved. He had been buried, and there he rested in the quiet garden.

Very early in the morning came Mary Magdalen and the other women to the tomb. The sun was just rising; the flowers of that blessed garden were just awaking; the dew-drops sparkled like rubies in the red sunrise; the vines and the creepers, fresh with their morning sweetness, hung clustering round the sacred tomb. To that spot the women hasten; the sun rises; she, Mary Magdalen, stoops down; her Lord is not there, but lo! the great stone is rolled away; a bright angel sits thereon; other angelic spirits are in the tomb.

The angel speaks: "He is risen; he is not here. Behold, he goes before you to Galilee. Alleluia! alleluia!" The Lord is risen indeed. And now, brethren, wishing you every joy that this holy feast can bring, I will ask the question, Where or of whom shall we learn our Easter lesson? We will learn it from her whose name, whose lovely, saintly name, forms the text of this discourse. In pointing you to Mary Magdalen, the great saint of the Resurrection, I do but follow the mind of the Church; for in today's sequence the whole universal Church calls upon her, "Dic nobis, Maria, quid vidisti in via?"

Poor, repentant sinners! You who during Lent have kissed the feet of Jesus and stood beneath his cross in the confessional, what a day of joy, what a lesson of consolation comes to you! Who was it upon whom fell the first ray of Resurrection glory? Who is it upon whom the great voice of the church liturgy, in the Holy Sacrifice, calls today? Ah! it was and is upon the "sometime sinner, Mary." Joy! Joy! For the forgiven sinner today. Alleluia! Alleluia! to you, blood-washed children of Jesus Christ; for she who saw the Master first was once a sinner like unto you.

Note: Born in England, Algernon Brown (1848-1878) converted to Catholicism at 18 and studied for the priesthood in America. Ordained in Cincinnati in 1872, he later joined the Paulist Fathers, a community founded to evangelize the American people. Sermons normally went for an hour, but Father Brown introduced the "five minute sermon" at Low Masses. His brother Louis also became a Paulist, and their brother was parish organist at St. Paul the Apostle, the Paulist motherhouse in Manhattan. Plagued by ill health throughout his life, Father Algernon died in 1878.