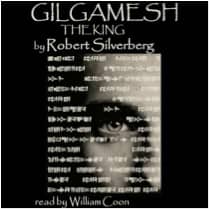 When the idea of Easter reading comes up, it is unlikely that the Epic of Gilgamesh is on your list. Surprisingly though, that is the story that springs to mind when I consider how unique Christianity is in comparison with other belief systems.

The Epic of Gilgamesh is one of the earliest known works of literature, being from around 2200 B.C. It tells of Gilgamesh, the king of Uruk (a city-state in Sumer), who is half human and half god.

Gilgamesh is the story that is often pointed out to Christians when saying that there is an earlier flood story than Noah's in Genesis. While it is true that the Epic of Gilgamesh contains an ark, a flood, and a family who is saved while everyone else drowns, there is much more to the tale and to the comparison with the biblical story.

If you are as unfamiliar with Gilgamesh as I was, here it is in a nutshell. Gilgamesh is running roughshod over the people of Uruk, including instituting the royal prerogative of deflowering brides before they marry. When the people beg the gods to make Gilgamesh into a good king, the gods create a wild man named Enkidu who is Gilgamesh's equal. After discovering that they are indeed equals, the two become fast friends and have many adventures together, one in particular because Gilgamesh rejects the goddess Isthtar's marriage proposal. When the gods become offended by one of the adventures and take Enkidu's life as forfeit, Gilgamesh becomes obsessed with the idea of immortality. He then sets off on a new series of adventures in quest of eluding death, only to find that all men must die. He returns to Uruk and becomes the good king that the people wanted all along.

When a story is as ancient as the Epic of Gilgamesh, it is not surprising that there are several versions that have been recovered on ancient clay tablets. What is surprising is that Gilgamesh's story is alive and well in modern culture, ranging from music to television to video games. That makes it more understandable that Robert Silverberg, that prolific master of science fiction, brought his talents to bear on retelling the tale in 1984. One wonders how earlier authors missed taking advantage of a story with such fantastic elements: a demi-god, slayer of monsters, and master warrior, searching for the key to immortality.

In Gilgamesh the King, Silverberg spins a mesmerizing narrative that follows the basic plotline of the original epic. Told by Gilgamesh himself, it begins with the funeral of his father and 6-year-old Gilgamesh's realization that friends and servants are being sent to their death so they can serve the king in the next life. Thus, the theme of man's struggle with the inevitability of death is introduced.

We also meet the young girl who will become the high priestess of Inanna (Sumerian goddess equivalent to Ishtar). As the personification of the goddess of love and war, she both tempts and infuriates Gilgamesh in a lifelong struggle for love and power. As well as the exciting adventures and fun of seeing how Silverberg interpreted the original epic, we see also that Gilgamesh is pondering big questions: why must people die, what is the meaning of life, and how does one balance destiny with action and free will?

In the afterword, Silverberg himself admits that he strove to give the story an historical Sumerian setting and tell it from the original Gilgamesh's point of view, while weaving in elements of the epic. There are those who lament this approach because it resulted in making certain adventures mundane compared to the epic. However, I do not think that the critics give Silverberg enough credit. Silverberg very effectively carries the reader to ancient times and into the mind of the main character. Gilgamesh experiences the gods' power and magic and, thus, so does the reader. The writing style is appropriately spare and simple, as if to echo how it would have been written in antiquity, as well as how difficult it would have been for an action-oriented hero to get his thoughts written down.

However, Silverberg also unwittingly gives a comparison between the ancient and modern secular worldviews. Considering the epic's origin in ancient biblical times, Catholic readers have an almost unparalleled opportunity to compare it to the revelations of God and human nature that are found in the Christian faith.

Readers can see how the Hebrew people molded elements of that tale to show the truth about God and where the differences between the stories. For example, the gods in Gilgamesh depend on the smoke from the people's burnt offerings as food. If the people are destroyed so that no more offerings can be given, then the gods will starve. Contrast this with the many times in the Old Testament that God says that he is not interested in burnt offerings. "For it is love that I desire, not sacrifice, and knowledge of God rather than holocausts" (Hos. 6:6).