Finishing the Race: Christ as Athlete and Agoniste 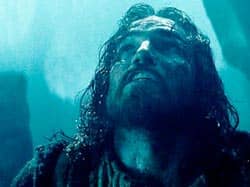 Even as a sophomore in high school, on the girls' basketball team, I had a Greek sense of the nobility of the athlete. I once wrote that I was willing to die for those girls, my teammates, and I wasn't entirely kidding. "I have fought the good fight, I have finished the race, I have kept the faith," observed St. Paul (2 Tim. 4:7), and to follow Christ, you do have to be an athlete of sorts. You have to train in loneliness, in poverty, in being persecuted, in pain, and in being misunderstood, in resisting a culture that encourages you to anaesthetize yourself, to take the shortcut, to not feel or think.

Years ago I read a column by Ron Rolheiser: "The Agony In The Garden—The Place To Ready Ourselves For Ordeals."

Luke's account of Gethsemane says this of Jesus: "And being in a certain agony (AGONIA), he prayed more earnestly." This word, AGONIA, doesn't just describe the intensity of Jesus' suffering, but also his readying of himself for the painful task that awaits. How?

An athlete doesn't enter the arena of competition without first properly warming up and, at the time this text was written, a serious athlete would warm up for a competition by first working himself or herself into a certain intense sweat, a lather, an AGONIA, so that he or she wouldn't enter the competition with cold muscles . . .

In the Garden of Gethsemane, Jesus dies before he dies and in that way readies himself for what awaits him . . .

Sports is a rudimentary form of self-sacrifice. You bond with your teammates and, together, consecrate yourselves to something higher. You "die" to yourself in favor of the shared goal of winning the game. This form of self-sacrifice, calling forth a deep nobility, underlies the family, politics, and war. You lay down your life for your teammates, your family members, your country.

A runner friend of mine once described a race during the course of which she made a conscious decision to put the focus not on winning but on letting go. "My surrender of autonomy came in the form of declining to measure effort in a rational or strategic way. It was really a sacrifice of focus or drive. In racing, this is a tremendous risk, usually a grave mistake."

Again, Christ's passion comes to mind. The intention, focus, and drive remain absolute; but the object is not so much to win, as it is in a race or a war, but to offer oneself up, to relinquish control over the results (while still, of course, wanting to "win"; i.e., there's nothing in it of resignation, or giving up, or out of false modesty, allowing the adversary to win). Faith consists in just this "letting go" into a way of being we can't yet imagine—startling, new. Interesting that the "aching, ugly, beautiful moment" this same runner described experiencing later in the race could also have been applied to childbirth.

The Crucifixion was Christ's "race." He trained all his life. He took the gravest of risks. Like my runner friend, he declined to measure effort in a rational or strategic way. He worked up his bloody sweat, his agonia, in the Garden of Gethsemane the night before. He endured betrayal, scorn, ridicule, and all the evil in men's hearts. He bore the scourge, the crown of thorns, the sponge soaked in gall, the nails. With his last drop of strength, he consoled the thief beside him.

With his dying breath, he commended his spirit to God. He refused to return violence for violence and thereby established the eternal triumph of faith over fear, love over hatred, good over evil, life over death. He finished the course.

For to his finest, most sublime hour—as any great athlete would—Christ had invited his mother.