Shouting Stones: Nicodemus in the Shadows

This is one in a series of Lenten reflectionson the men and women who became the "shouting stones" for Jesus on his way to the Cross. How do the actions of these everyday folk invite us in our Lenten journeys? In this reflection, Peter Wallace, host of the Day1radio program, imagines Nicodemus's ambivalence about following Jesus. 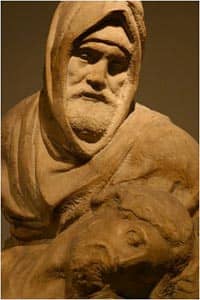 What if they find out? What if I'm exposed? I could lose my position, my wealth, even my life. These people, my fellow Pharisees, are serious—deadly serious.

The rabbi has had them in an uproar for some time now. He seemed to go out of his way to antagonize them. Imagine, breaking the Sabbath so audaciously, time and again. Calling my fellow Pharisees all manner of names. And he claimed to be from God! But then, I realize, he did have a point.

I reflect on those early days when word about this teacher started buzzing around. People were gossiping like mad. Was he for real, they wondered, or just another crackpot? Could it be that he was the Messiah? And what's this about miracles—even healings? Was he a magician, a trickster, a huckster, or something more? Something real?

It wasn't really so long ago. I can't believe how, in such a short time, he came to captivate so many—and to infuriate so many others.

There was the time early on when I had to find out for myself. I am a Pharisee, after all, one of the leaders responsible for the religious wellbeing of the people. And some of the things I'd heard about him were intriguing.

So I'd secretly made arrangements to meet with him. It had to be late at night so no one would see me, just in case. I just wanted to talk to him, to look him in the eye and hear what he had to say.

To say I was blown away by him would be an understatement. Oh, he was for real. But what a reality! What he said to me that night made no sense, and yet it did, more than anything I've ever known.

I had approached him that night with respect. After all, I did respect him, for few had gathered such a throng of followers as quickly as he had. And the signs he'd been performing were difficult if not impossible to refute. But I had so many questions, so many doubts.

And there I was—me, Nicodemus! A beloved leader of the Jews, well respected, knowledgeable, taught by many great elders in the ways of the faith for years. And this man tells me, "No one—not even you!—can see the kingdom of God without being born from above."

Be born again? How does one accomplish that? Born from above? It was ridiculous. But the more the rabbi spoke, the more sense it made to me. And yet it couldn't be true. Who was this man? What was his training? And he mocked me as a teacher of Israel who couldn't understand these simple things he said!

I left him that clandestine night more confused than before. And yet . . . and yet a connection had been forged between us that I could not shrug off.

And later the rabbi had gotten in trouble with my colleagues, who were upset that he was getting out of hand. The temple police had failed to arrest him, and it was clear that his spell had even taken hold of some of them. Were these temple police, too, deceived? When I tried to speak up, suggesting calmly but a bit nervously to my Pharisaic brethren that the law doesn't judge someone without a proper hearing, they jumped on me, wondering if perhaps I wasn't one of his followers as well.

That was a close one. Clearly, I had to be very careful. I had to cover my tracks. I had to watch my words, lest those in power question me, perhaps even arrest me as a follower of this radical rabbi. Was it worth my life to continue pursuing this mad man?

But what if he was who he claimed to be? What if I missed out on the most important relationship I could ever experience in this or any other life?

Now, darkness has fallen, and the rabbi's enemies have had their way. Jesus has been put to death. I've heard from my friend and colleague, Joseph of Arimathea—another secret follower—that he needs my help. He's asking Pilate for permission to take the man's body, prepare it, and put it in a tomb before the Sabbath comes. We must act quickly before it's too late.