Something of the Glory of God Shines on Your Face 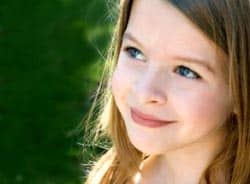 There are two major reasons why this is true.

But first, here's a little riddle from catechism class that will help us uncover the reason: What are the only man-made things in heaven? Take your time. Puzzle it out. We can wait . . .

Answer: The nail prints on the hands and feet of Jesus, and the scar in his side.

The post-resurrection gospel accounts verify its amazing properties: walking through walls, startling appearances and disappearances (Cf. Lk. 24:31, 36-43; Jn. 20:19-20). Most famously Jesus appeared to Thomas and the apostles, permitting Thomas to probe the nail prints to assuage his doubt (Cf. Jn. 20:24-29).

The Church thus confesses that Jesus is inseparably true God and true man. He is truly the Son of God who, without ceasing to be God and Lord, became a man and our brother . . .

The Son of God . . . worked with human hands; he thought with a human mind. He acted with a human will, and with a human heart he loved. Born of the Virgin Mary, he has truly been made one of us, like to us in all things except sin.

Even now, that mystical Body is united with the Trinity. The body of Jesus was not some kind of disposable earthly transport vehicle. No. Jesus completely united himself to humanity in a permanent way.

It is particularly relevant to the "respect life" issues—to respect the life of the body and care for the dignity of the human person in every circumstance of natural life, for the body is also a temple of the Holy Spirit (Cf. 1 Cor. 3:16). The most powerful sign we have of that is that Jesus, God Himself, took on a body.

The humanity of Jesus signals to us the deep meaning of the human person. "Christ by his incarnation has united himself in some fashion with every person" (Gaudium et Spes, par. 22.).

That is the second reason why the dignity of the human person is thus elevated in the hierarchy of social teaching. (And I'm guessing you might already know the first . . .)

Therefore, via the Incarnation, one might say that God took on the image and likeness of a man.

The first Creation account declares man and woman were made in the "image" and "likeness" of God! Human persons being made in the image of God precedes the Incarnation of Jesus.

Indeed, that is a more profound view of humanity and the world than one might see from the pinnacle of Everest.