The Myth of the Great Ending: An Overview 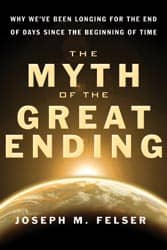 From the Christian Apocalypse to the Mayan Prophecy of 2012, Doomsday myths have been a fundamental part of every human culture. Over and over these catastrophic events are predicted - generating years of study, speculation, panic and preparation. Yet even when they fail to manifest, we remain obsessed over the idea of wholesale destruction.  Why?

In his new book The Myth of the Great Ending, Professor Joseph Felser asks: What if we haven't recognized the true message of these myths? What if our pre-occupation with World's end masks something more primitive and profound - a desire for reconciliation between our inner and outer worlds- nature and our own natural spirituality?

Joseph M. Felser, Ph.D. earned his doctorate in philosophy from the University of Chicago and is an associate professor at Kingsborough Community College/CUNY in Brooklyn, NY. He is the author of The Way Back to Paradise: Restoring the Balance between Magic and Reason. His work appears regularly in scholarly journals and he was invited to give the Keynote Address at the world-renowned Monroe Institute's 20th

Praise for The Myth of the Great Ending

"Felser (philosophy, Kingsborough Community Coll., CUNY) looks at the prevalence of the end-of-the-world belief system and finds it a morbid and distorted idea that should be discarded so that we can proceed into a new, unified way of thinking and understanding. He believes we must align ourselves with nature and with our own true deepest selves to overturn negative beliefs and move forward into a healthier, more positive, happier life. This is one of his main points in his previous book, The Way Back to Paradise: Restoring the Balance Between Magic and Reason. Adding appeal to this latest work, Felser sprinkles throughout the history of the end-of-the-world movement from Zoroastrianism to present-day thinking and the ideas of many of the world's great thinkers including Joseph Campbell, Carl Jung, David Bohm, William James, and others. VERDICT This book is worth reading for those fascinated by the idea of the world coming to an end. It makes many good points and isn't so scholarly that the average person couldn't enjoy it. Good for large public libraries."

"In The Myth of the Great Ending Joe Felser peels through layers of belief and mythology to reveal nothing less than the central underlying truth of reality creation, and he does it with a keen, affectionate intelligence that dissects the full spectrum of modern and ancient ideas. Not such a balanced and original voice has spoken in the world of consciousness studies since Jane Roberts herself lived among us."

-Susan M. Watkins, author of Conversations with Seth and What a Coincidence!