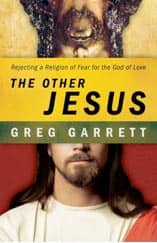 The Other Jesus
By Greg Garrett

Some years ago, in the early 1990s, I met one of my heroes, Maya Angelou, a writer, civil rights activist, actress, singer, and person of faith. If you don't know Maya Angelou, go and Google her this instant: she's Oprah on multivitamins.

Ms. Angelou came to Baylor University, the fine Texas university where I have taught for the past twenty years, to give a campuswide lecture, and during her stay she did two things that I have never forgotten. First, at the banquet welcoming her to Baylor, she gently—but vocally—took us to task for the lack of diversity represented in the dining room. Although Baylor has become a more racially diverse school than even our huge public university neighbors, that night, as Ms. Angelou pointed out, the only black faces in the room—besides hers—were waiting tables. As I looked around, I saw white faculty, white administrators, and even some prize white students. It stung to recognize the truth of her observation, but I believe it has made a difference in Baylor ever since.

Second—and I blush a little to relate this, as I do every time I tell it—Ms. Angelou was invited to visit a class in the English Department, and after she had finished speaking and the students were filing out, I went up to thank her for coming.

Learn more about this featured book in the Patheos Book Club here.

Read a conversation about faith and practice with friends and fellow authors Greg Garrett and Brian McLaren here.

I understand, now that people say such things to me, how patronizing I was to her, how what I intended as serious praise sounded like something far less. And knowing that I intended only compliment, I try to react with something like her grace and dignity when someone gives me a taste of my own medicine.

"Ms. Angelou," I told her, "I just wanted to tell you how grateful I am for what you've written and all you've done. I'm amazed at everything you've accomplished."

And then the shame begins. "And to think," I said, "you're a Christian."

I think what I meant by that was something like "And how great that a Christian accomplished all these things." In those days, although I would have described myself as, at best, "culturally Christian," just as some Jewish people describe themselves as cultural Jews, I didn't much like Christians. Maya Angelou restored my hope a little, as Martin Luther King did, that maybe I could be some kind of Christian someday, but my general reaction to Christianity in those days was not exactly positive.

So I'm sure that what I intended as "Thanks for giving me hope in Christianity" actually sounded like "I'm really kind of amazed that a Christian would care about any of these things, let alone do them so well."

Ms. Angelou was sitting at a desk when I went to speak to her, and she had taken my hand when I introduced myself. She still held it as she looked up at me. A gentle smile broke across her face, and she shook her head—at my question or at me or both.

"Oh, honey," she said in that deep rich resonant voice, "I am not a Christian. I am trying to be a Christian."

She squeezed my hand as punctuation and let it go.

Then she said her good-byes, got up, walked out of the classroom, and as far as I know, out of my life forever.

But as I heard historian Thomas Cahill say recently at Washington National Cathedral, "Acts of generosity have untold consequences," and this act of generosity may have saved my life—or at least begun that action.

Though it would be years—literally—before I could get my head around what she had offered me that day at Baylor, after a long time, after some wandering in the wilderness and thrashing in the dark places at the bottom of the sea, I realized that what she was presenting me with was a new way of believing in God, a way of questioning that didn't demand all the answers, a way of pilgrimage that didn't depend on a single moment of faith. That way could be (and has been) satisfying and life changing, a journey growing out of a decision, rather than a single decision isolated in time and space.

In unChristian, David Kinnaman and Gabe Lyons do more than just record all the bad things that people (and by "people," I include, possibly, you and me) have thought about Christians in recent years, as expressed in their polling data. They also draw some conclusions, one of which has to do with belief and salvation: Most people exposed to Christianity are barely getting their feet wet, since many popular ways of being Christian make Christian faith into "mere mental allegiance to a religion. The truth is that when a person makes a commitment to Christ, it is just the first step into a much-larger reality."[i] And so it should be, although it certainly starts with a commitment of some sort.