What William, Kate, and the Royal Wedding Can Teach Us 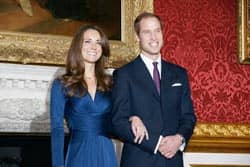 Maybe you've been watching scornfully as the British tabloids whipped the UK into a frenzy over the Royal Wedding—and check-out stand magazines and TV shows have tried to do the same here in the US of A. Maybe your interest is clinical: what's all the fuss about? Why are billions of people going to watch or read about this event? Maybe you've confessed to friends that there is actually something monumentally cool about two such good-looking young people having a storybook wedding. Maybe you're one hundred per cent on board with the celebration, are planning to watch every little bit of coverage, or even to position yourself somewhere along the procession route in London for a glimpse of Prince William of Wales and Kate Middleton.

It's seemed almost impossible to get away from the Wedding of the Century these past few weeks, and believe me, I've applied myself to that task. Although I love England and return to spend time in the UK each year, although I love castles and history and spectacle, there just doesn't seem to be a whole lot of reason for a monarchy to exist if it's almost entirely for show. So why go berserk over a wedding continuing this archaic office, an office that may not even be in existence by the time William might ascend the throne?

Some people might ask the same of the Church of England, the established state church, of which the Queen of England is the honorary head: Why should it exist if it seems to be largely for show? It's a church of rich spectacle, of pomp and circumstance, a church that is a treasure of English life - and, like the monarchy, an institution to which almost nobody in the UK pays any attention on a day-to-day basis. Only a tiny percentage of Britons attends church weekly. Catholic weekly attendance figures are higher than CoE percentages now, but remain dismal—about 15 percent.

Adrian Hamilton wrote in The Independent recently that the Church of England (like the monarchy) was "dying out of political irrelevance and popular unconcern." After this flash of popular sentiment directed at the Royal Wedding fades, is it possible we might recognize this event as a last great ceremony of both these great British institutions?

I don't pretend to speak for the value of the monarchy, but I believe it would be a tremendous loss for the people of England—and for the world—if the Church of England disappeared. While many Britons aren't involved in their parish churches, while many parish churches that are a thousand years old are standing empty or all but empty, the Church of England has provided a backbone of rich and beautiful liturgy and music since its founding in 1534. For Britons it—like the monarchy, I must admit—has provided a common organizing principle in an increasingly diverse and fast-moving society. Crown and Church would have to be considered in any answer to the question "What makes someone British?"

The Church of England has also, as Hamilton noted, marked the rites of passage of British lives—from birth, childhood, marriage, and sickness, to death—with grace and care. "The value of spiritual succour, or just plain caring, at times of grief as of joy" should never be discounted, he said. And this is true. The loss of a caring institution, as irrelevant as many people believe it to be, would be a loss indeed.

All of which brings me to consider how the Royal Wedding might represent something good and beautiful and spiritual despite all the commemorative rings and stamps and plates and condoms trailing in its wake. Here in a most public way, two attractive young people—one of them slated to be a future king, one of them a woman of stunning beauty and acclaimed fashion sense—are agreeing to love and support each other for the rest of their lives, forsaking all others, until death should part them.

They are also pronouncing these vows in front of the celebrant, Rowan Williams, the Archbishop of Canterbury, spiritual head of the Church of England and spiritual leader of 80 million Anglicans around the world. Rowan Williams is a thoughtful and thought-filled man, my favorite theologian and a dear friend. He perceives the decline of the Church of England, has experienced the infighting within and the sniping without. He has no false expectations that fairytale weddings lead automatically to happily-ever-afters. Yet he also believes that this day might be a signal event, particularly if we watching around the world commit ourselves to do more than just watch.