A funny thing happened on the way to Eastertide: zombies.

Allow me to explain. For the week after Easter, we decided to center our gathering around 1 Peter 1, specifically verses 3 and 4: "By God's great mercy God has given us a new birth into a living hope through the resurrection of Jesus Christ from the dead, and into an inheritance that is imperishable, undefiled and unfading." When I read these verses aloud at our weekly Teaching Team lunch, one of our Elders, Z, said, "All I can think of when I read these verses is zombies."

Now, a number of very off-the-wall things have been said at Teaching Team, but this might make the top five. "How in the world does this sound like something zombie-related?" I inquired. He explained, "Well, you know, words like imperishable and undefiled, that's exactly the opposite of zombies." Duly noted. The conversation moved on, and we left Teaching Team without a firm plan for how to organize our next series on Easter themes of hope and resurrection. (I tend to talk about hope and resurrection ad nauseam, so there's little ground we feel we haven't covered . . . multiple times.)

Over the next few days, I found myself returning again and again to the idea of zombies. I confess that I don't usually think about zombies. I am easily repulsed by gore, so it's not particularly my kind of genre. But I couldn't help but wonder why they have become so popular, what they represent, why they are so disturbing and yet why people are drawn to them. They must tap into something deeper or bigger—a cultural story that helps us make sense of the world, or some deep-seated fears we can't seem to face directly. From what little I do know about them, I started to realize that what Z said that day at Teaching Team was absolutely true: zombies are the anti-resurrection creature. They are the complete opposite of the Easter event. They represent the total absence of life: destruction, death, mindlessness, hopelessness, purposelessness. The zombie apocalypse is what happens when the world is literally enveloped in despair, with no way out.

It explains why this isn't my favorite genre.

I ran these musings by Teaching Team. What if we spent three weeks talking about all of that?! What if we set zombies on one side of the spectrum, and resurrected humanity on the other side, and talked about all the forces and circumstances and choices that either pull us one way or the other? Though there was a lot of excitement about the idea, we spent over an hour discussing all the possible pitfalls and problems in tackling the subject. By no means was everyone convinced. To do this well, it would need to be very, very intentional, and border on the overly explained.

I realized I was going to need to do a lot of zombie research. I loaded up on books, searched on Google (did you know that May is Zombie Appreciation Month?!), and had conversations with community members more steeped in the genre than I. Let me tell you: there is more material than you can ever imagine about zombies. Philosophy doctoral students are writing papers about zombies. Theologians are discussing zombie themes on their blogs. Professors have written books and papers and articles about them. I have, to my great surprise, found it all fascinating and intriguing. (What else do you call an essay that quotes Nietzsche, Spinoza, and zombies in the same sentence?!) Initially I wasn't certain we would have enough to talk about for three weeks, but I quickly realized it was not going to be a matter of content, but of configuration. How does one organize a three-part conversation about resurrection and zombies?

To that end, Z suggested I watch the movie Zombieland. It is a sarcastic and funny tale of humans trying to survive the American zombie apocalypse. The main character, Columbus, a quirky and somewhat OCD college student, has survived because he strictly adheres to a set of rules. The rules provide some of the wittiest moments in the film. They also happen to be a great way to shape our conversation.

So Sunday, we kicked off the first zombie night, entitled "Rule #1: Cardio." In Zombieland, the most important thing is cardio. You have to be able not only to run, but to outrun the zombies who are constantly chasing you. So the very first rule is to practice cardio, every day. To place the rule in our context, where resurrected humanity lies at one end of our spectrum and zombiehood lies at the other, cardio means being serious about exercising our hope. We practice it like we practice cardio. Those verses in 1 Peter describe our "living hope," and living hope is not like a passive sack of flour that sits idly on our shelves, only to be used when baking. Living hope implies constant movement, intentional activity. If we don't want to live in a land of despair, we have to exercise our hope daily.

Despite some trepidation, Sunday's talk went rather well, and people really seemed to connect to the idea. As strange as it may be to talk about zombies, there is nothing otherworldy or strange to talk about the importance of practicing hope. There is nothing abstract in heralding the act of God's recreation of the world as the most robust, important, and life-giving work there is. So we'll talk about zombies for a few more weeks. Surprisingly enough, it's a fantastic way to see the beauty of Easter. 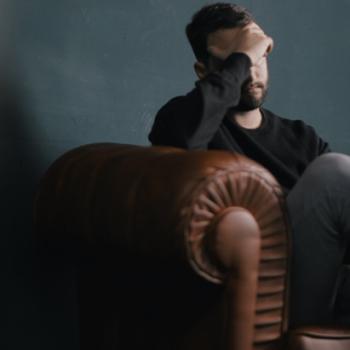 5 Things That Keep Pastors up at Night
Robert Wachter
2

Liberation for the Oppressed (Part 1 of 3)
Herb Montgomery
3

Do You Really Want To Find Your Destiny?
John Beckett