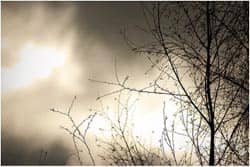 Each day, I wake up and say aloud, "This is the day that God has made; I will rejoice and be glad in it." Then I ask God, "What adventures will I have today? What new possibilities will emerge that will call forth my creativity and courage? Help me be ready to respond." According to Family Life Radio preacher Harold Camping, I better be ready to respond in a big way on May 21.

On this day, Camping predicts, the earth will shake, tombs will open, the dead will arise, and, along with a faithful remnant of Christians everywhere, the true believers will ascend to the heavens to meet Jesus. Camping estimates that only 2 percent of the earth's population will be "raptured," or rise to meet Jesus in the clouds, while the rest of creation will endure five months of torment before the curtain falls on the human and planetary adventures.

While scripture suggests that no one knows the time of God's final fulfillment of history, Camping believes that scripture can be deciphered, and that he has done just that, down to the day and the hour. In fact, the Bible is a book of clues, more elaborate than a Dan Brown novel, and all the clues point to May 21, 2011, exactly 13,023 years after the creation of the world and twenty-three years after the beginning of the final and great tribulation, which, according to Camping, we've been living in since May 22, 1988. Five months later, October 21, 2011, God will finish the job, destroying the creation in its entirety. The rapture and earthly upheavals will begin at 6 p.m. in the Pacific Rim and work their way eastward, time zone by time zone.

Now, Harold Camping is not the first person to predict the rapture of the saints and the end of the world. Predicting the end of the world has become big business in the last forty years. In fact, Camping predicted 1994 as the end of the world, but had to revise his timetable due to information that indicated his first prediction was based on mathematical errors. For centuries, saints of the church have climbed mountains, quit work, and even donned white robes to await the Second Coming of Jesus. Popular writer Hal Lindsay, author of the Late Great Planet Earth has had to revise his timetable from the 1980s to a more generic date. Tim LaHaye's Left Behind series proclaims the certainty and imminence of the Second Coming but does not provide a timetable. The Jehovah's Witnesses, the most well-known end time sect, have had to reschedule the apocalypse on numerous occasions and, as their numbers swelled, reevaluate their understanding of how many true believers will live in God's new earth. Despite two thousand years of failed predictions, followers of Camping have purchased thousands of billboards to proclaim, "The Bible Guarantees It."

What do you make of these end-time prophecies? Such prophecies often arise in times of upheaval. The tectonic plates are once again shifting -- geologically, culturally, economically, and spirituality. Anxiety is in the air, because we know that things are rapidly changing and, as Al Gore asserts, earth is in the balance. The world is too much with us, and far too uncertain. Global climate change, along with earthquakes and tsunami, threaten our very existence and cultural achievements. In this context, some find solace in knowing that God is in control and truly has a timetable. Sure of our being chosen, they rest assured that they will be safe regardless of what the future will bring. Now, we could all use a sense of certainty but the price for it is high in Camping's case: retreat from the evils of this dying world and abdication of any social or global responsibility to wait for God to come on the evening of May 21.

Such doomsday prophesies, whether related to the Second Coming of Jesus, the Mayan calendar, or solar flares, have always interested -- and sometimes unsettled -- me. On the one hand, they remind us that we live in a universe that balances order and chaos. German-American theologian Paul Tillich once spoke of the "ontological shock" of non-being, the fact that everything we count could be annihilated in a moment's time. None of us can count on the next minute for ourselves or the planet, despite the likelihood that the earth will continue to revolve around the sun, spinning on its axis, all at a tremendous speed, for several billion years. Life seems stable when, in fact, we are rapidly spinning, and while we can hide life's movements, deep down we know that nothing endures forever. Like a stopped clock, which tells time correctly only twice a day, there might come a time in which one of these predictions turns out to be right. That very possibility can cause us anxiety, since with these predictions come narrow understandings of God and salvation -- the image of God who chooses to destroy this good creation and a narrow door to salvation that can only be entered by repeating certain doctrinal statements.