Memorial Day and the Spirit of Sacrifice 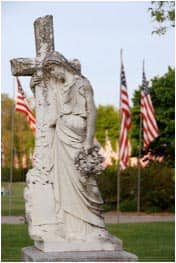 As I ponder the theological and spiritual dimensions of Memorial Day, my thoughts return to the Mother's Day Celebration at our home in Lancaster, Pennsylvania. My son and I, and our nine-month-old grandson, gave thanks for the gifts of love embodied in three generations of mothers. A parent's love embraces joy and sorrow, playfulness and sacrifice. For parents, fathers and mothers alike, love is embodied in acts of sacrifice—midnight feedings, trips to the doctor and pharmacy, helping with homework rather than playing golf or going to a movie, agonizing over a child's fears and anxieties, and deferring personal gratification so that our children may have the financial resources to flourish. Whether it's a matter of choice or DNA—and most likely it is both—parenting is, by nature, sacrificial. It expands our sense of self to include our children's wellbeing.

I would go so far as to say that sacrifice is built into the nature of reality, or at least what it means to live a good life. We let go of certain things, so that greater things may come to pass. We defer gratification, so that others might flourish. We live simply so that others might simply live. We give up our time—and maybe even our lives—to protect the innocent and vulnerable.

Sacrifice is built into the interdependence of life. Contrary to Ayn Rand's rugged and metaphysically implausible individualism, every achievement an individual makes is grounded in the sacrifices of others; some are sacrifices freely chosen, while others are tragically forced (for example, sweat shops and slavery). Sacrifice is essential to the wellbeing of the "body of Christ," described in 1 Corinthians 12. The various parts consciously—and I want to underline the word "consciously" or "willingly"—choose to place their own wellbeing in relationship to the wellbeing of the whole body. Here we are not talking about co-dependence or masochistic behavior but willingness to expand (and sometimes sacrifice) our understanding of our wellbeing to include the wellbeing of the wider world, whether it is our family, congregation, country, or the planet.

Jesus proclaimed that there is no greater love than giving one's life for another. This isn't a matter of being a scapegoat, although there is much wisdom in the work of Girard and his followers, but a deeper recognition of one's responsibility to sacrifice so that others may experience safety, joy, growth, and abundant life. Jesus followed the way of the cross—when other alternatives were possible, I believe—as a working out of his vocation and choice to affirm his calling so that we might have abundant life. Jesus' sacrifice was neither compelled by God nor predestined but emerged from the alignment of his vision and will with God's vision for abundant life for all creation.

Memorial Day has traditionally been about sacrificial living. Beginning first in the years following the Civil War, Memorial Day commemorated those who died in this tragic conflict. After World War I, Memorial Day was expanded to include all who died in service to their country. Initially, just military graves were decorated with flowers. However, over the years, many people also chose to decorate the graves of loved ones—fathers, mothers, children, brothers, and friends—on Memorial Day. This was an acknowledgement that "greater love" has many dimensions that go beyond military sacrifice.

While Memorial Day is a national holiday, it has profound spiritual lessons for us. It is about sacrifice and love of family and nation, not chauvinism and violence. If Memorial Day has a place in the liturgies or worship services of the church, its place is to inspire gratitude and remembrance for those who have sacrificed life and labor, and time, talent, and treasure, for the greater good.

Regardless of your political and religious views of military service and just warfare, I believe that it is appropriate to remember fallen soldiers and first responders in Christian worship on Memorial Day weekend. The spiritual dimension of their sacrifice is that they looked beyond their own self-interest, even as they climbed the steps of the World Trade Center, protected an Afghan family, or guard our nation's coastline or skies. In saying "yes" to their vocation, they knew it might place them in harm's way.

The sacrificial love remembered on Memorial Day is about vocation and choice, rather than co-dependence or aggrandizement. As we look at the vocation of those who sacrifice on our behalf, we are challenged to move beyond our individualism, narcissism, consumerism, and self-interest—and this may even include "American exceptionalism" or "America first" ideologies—to embrace the wellbeing of others, including the planet. We can celebrate our nation's fallen heroes without being nationalistic.

Memorial Day is about remembering, and then dedicating our own lives to a larger, greater good for those we love, our nation—and this may mean protesting against military action, injustice, and enmity to immigrants—and the planet as a whole.