On the Highway to Hell 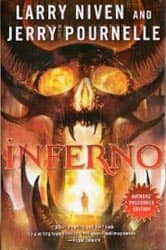 If there was one book that I rapidly wearied of having recommended to me after my conversion, it was Alighieri Dante's Divine Comedy. I am not naturally drawn to the classics. Likewise, I am not drawn to poetry, other than the sort beginning, "There was an old man from Nantucket." You can see why the combination of an epic poem, in Italian, written in the 1300s, requiring copious footnotes, is one I would avoid. What is Italian for "boring"?

Weren't the lessons contained in this classic available elsewhere?

As it turns out, they are. Two modern novels that reboot Dante's Inferno are great introductions to the original. They necessarily follow the original foundation laid by Dante but diverge enough to include modern tweaks that make them entertaining stand-alone genre fiction in the process.

The path these books tread is the one forged by Dante and his guide, Virgil, through the nine circles of Hell. Dante, of course, should not be in Hell and is allowed to leave, but the only escape to Purgatory—then to Heaven—is through the center of Hell itself. As Dante encounters the sins populating each circle, we learn about them through the stories of the damned, and their punishments. Allegorically, the soul is seeing sin for what it really is, based on the medieval Christian theology and philosophy of Dante's time.

It is not necessary to know any of it in order to understand and enjoy the modern retellings.

Inferno, written in 1976 by Larry Niven and Jerry Pournelle, gives us Allen Carpentier, an agnostic science fiction writer who dies while showing off to his fans. Awakening in a bottle on the outer edge of Hell, and released after calling on God for mercy, he is met by Benito—a Virgil-like guide. Carpentier doesn't believe he is in Hell and has many amusing theories as to where he actually is, including an amusement park named "Infernoland." Finally, he sees enough irrefutable proof to begin focusing on the sins—and to acknowledge his own guilt, in varying degrees.

The authors have updated some of the representations, and added some sins, several of which reflect their own political opinions, although rarely in a heavy-handed fashion. I especially enjoyed their addition of a huge administrative office where the unfortunate denizens of Hell must perfectly fill out forms. Whether or not one agrees with them, this is in keeping with the original, where Dante generously populated the circles of Hell with politicians, clergy, and bureaucrats of his own day. Carpentier meets infamous villains, such as Billy the Kid, and people from the future.

A major difference between this work and the original, is that the authors decided to incorporate C.S. Lewis's theological ponderings from The Great Divorce, which allows characters in Hell to repent and choose salvation. This revision allows Carpentier a markedly different attitude than Dante's. Where Dante follows Virgil and mocks the damned, Carpentier tries to control his destiny and repeatedly offers help and mercy to Hell's inhabitants.

Dante's Journey, a 2011 book by J.C. Marino, is an action thriller with distinct similarities to Inferno. Detective Joe Dante is hot on the trail of the criminal who murdered his family when he himself is killed. Met by Virgil at the edge of Hell, he doesn't believe that he is dead. Joe repeatedly attempts to take control of his destiny and track down his family's killer. Unsurprisingly, he repeatedly discovers that following Virgil would have put him in the same place on his journey, with less pain in the process.